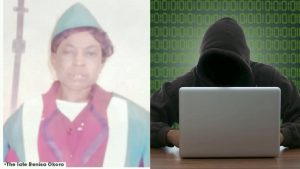 The entire Umuka community in Okposi, Ohaozara Local Government Area of Ebonyi State has been in mourning mood since August 19, this year, when news broke out that a man, Eric Ifeanyi Okoro, aged 28, has hacked his aunt, a hunched primary school teacher, Benisa Okoro, to death in her sleep.
Benisa’s absence would be felt more as schools reopen this week, by pupils of the community primary school in the area, where she was said to have been a kind of mother to all the children with her uncommon love and care to them.
The slain lady said to be about 52 years old had returned from a church programme tagged: ‘Night of Cry’ service, on August 18, but met her nephew, Ifeanyi absent at home. She was said to have quickly prepared dinner for the young man before going to bed for a night rest.
While she slept off, Ifeanyi, popularly known as ‘Yahoo Boy’, returned home in the wee hours, ate the food kept for him by his victim and took his jack-knife and stabbed her severally on the chest till she died in the pool of her blood.
According to a reliable family source, the suspect allegedly phoned his father, Mr Alfred Ogbonnaya Okoro in Owo, Ondo State and reportedly informed him that he had snuffed life out of “Auntie Benisa, and it remains one person for me to hit the gold, get rich quick and become self-actualized”.
The father in his disbelief ignored the information and went about his normal business the following day, being Sunday.

“He had thought that his son might have made the phone call under the influence of alcohol or hard drug”, the family source said.

But the lid was blown off when the next morning, ‘Yahoo Boy’ as he is fondly called, went to the Okposi General Hospital morgue and called an ambulance van to carry the corpse of his aunt who died in his own hands to the mortuary. On arrival with the ambulance at his father’s compound, the van driver, Mr Ogbonnaya Okoro Ogudu had reportedly shuddered on seeing the corpse enmeshed in thick clot of blood and declined to convey Benisa’s body to the mortuary.
He instead pondered in bewilderment; asking the young man:

“Who did this to your Auntie Eric? What happened to her?

He then shouted on top of his voice alerting the entire neighbourhood who then rushed to the scene.
The first callers at the scene were jolted by the horrible sight, and spontaneously, they made distress call to leaders of the community who were in in a meeting at the community playground that fateful morning. Immediately, the community leaders adjourned their meeting and rushed to the home of Alfred Ogbonnaya Okoro to have first-hand information of the distress call.
Chairman, Umuka Community Development Union (UCDU), Mr Sunday Okorie Agwu, said that Eric did not deny being responsible, as according to him, he confessed and boasted that he had marked his father as his next target.
There and then, the community made calls and handed him over to the Divisional Police Headquarters at Obiozara; from where he was later transferred to the state Criminal Investigation Department (CID), Abakaliki.

“We, the chieftains of Umuka community have reached a decisive conclusion that should the police fail in their duty of bringing the self-confessed murderer to book, Eric can never return to this community to live and co-exist with us; the Umuka Ogwumaeze people any longer. He had been a security risk to the lives and peaceful coexistence of the people of this community since he reportedly attacked his father and attempted to kill him in Owo, Ondo State,” the community leader said.

Agwu who is also the head teacher of Umuka Community Primary School, Okposi, where Benisa was teaching before her gruesome murder described the victim as a kind teacher whom the school pupils were always very fond of before her untimely death.
“By the time the school is reopened to studies, her pupils will certainly miss her kind gestures and endeared patience at imparting knowledge and lessons to the children”, he added.

Police Public Relations Officer of Ebonyi State command; Loveth Odah, a Deputy Superintendent of Police (DSP), who confirmed the incident said that the matter was being investigated and that the suspect will soon be charged to court.

Continue Reading
You may also like...
Related Topics:Yahoo Boy