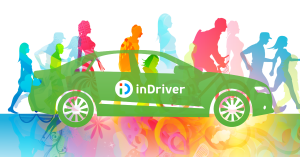 The first time I was told about the inDriver app, sincerely, I felt excited, but one thing that came to my mind was, why did it take this long for such an idea to be introduced into this new era of cab-hailing Apps in Nigeria.
So, I grabbed my phone, logged onto Playstore and downloaded the App. Being a regular customer of one of the cab hailing service here in Lagos, Nigeria, I knew what I was looking out for on the inDriver App. For some reasons, I felt comfortable with the map and the user interface was quite simple for anyone to navigate through. I realized the base fare was 500 Naira, so in my mind I felt, okay this will separate the grain from the chaff.
So, I entered my first offer which was relatively low compared to what I usually pay for the same trip on other apps, inDriver started broadcasting my offer, I got a bit impatient, topped my initial offer with a few Naira, which was still lower than what I pay to the same destination.
While still in doubt if I would find drivers who are willing to give customers the power to choose their own fare for rides, boom, a driver popped up, and in no time he was at the pick-up spot. For the first time, I could relax while taking a ride without worrying about the possibility of extra charges to my ride at the end of the trip.
Apparently, I had a conversation with the driver and discovered he was actually on other ride-hailing apps but made me realize his trips with the inDriver App allows him to make up for his idle times plus most importantly he has no reason to argue or put tension on his clients at the end of any trip.
At the end of the trip, I asked myself, why haven’t I heard about this inDriver app before now.
Continue Reading
You may also like...
Related Topics: