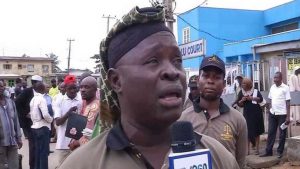 The Muslim Rights Concern (MURIC), has opposed calls for revolution in Nigeria and change of President Muhammadu Buhari government.

Its Director, Professor Ishaq Akintola, in a statement on Wednesday, said the proponents were hasty in assessing the current administration considering the number of years the opposition was in power.

Noting that MURIC had called for the release or arraignment of Omoyele Sowore, leader of Revolution Now movement, Akintola noted that the conveners have lost touch with reality.

“How do you judge an administration which is yet to take off in its second term? What are the criteria the #Revolutionnow group has used to arrive at its hardline position?, he quipped.

“This is an administration that was ambushed, strangulated and sarakitised from the first day of its inauguration in May 2015. Are they blind to history? Today was born from the wombs of yesterday.

‘Why can’t they take a glance at where this administration is coming from? Have they forgotten how the 8th National Assembly (NASS) held the Buhari administration by the jugular for four good years?

“So what has changed since then? How much time has Buhari spent in his second term? He has not even taken off. Wednesday 21st August has just been fixed for the swearing-in of ministers. Why won’t they allow this government to settle down? Who is afraid of Buhari? Whose cupboard is full of skeletons? Why are they in so much haste?

“Does it mean that both the leaders and supporters of #Revolutionnow were pleased with the sarakitisation of Buhari’s first term? Where really do they stand in the war against corruption? Where were they when the 8th Senate delayed budget for seven whole months?

“We put it to #Revolutionnow that it has misplaced its priorities and failed to identify the true enemies of Nigeria. #Revolutionnow should have organized its uprising against the 8th NASS. By the way, where were they during the general elections that brought Buhari to power? How did they fare? Is it proper to change by force what the ballots refused to grant?

“Sowore is a good material for future politicking but he has to redirect his energy towards reengineering Nigerian youth for service, patriotism and dignity, not towards removing a democratically elected government.

“We advise #Revolutionnow to dismantle, dissolve into a political party and wait for 2023. Even a coup will not pay the group. Coups are no longer fashionable. The Buhari regime is not a product of violent change. It evolved via due democratic process.

“Any other process is therefore unlawful, illegal, illegitimate and unconstitutional. In view of Buhari’s sterling qualities and his numerous fait accompli in spite of all odds, we affirm clearly, unambiguously and categorically that Mr. President has our vote of confidence.”

Thousands Of Imo Women Stage Protest, Give Ihedioha 72 hours To Apologize to Okorocha’s Family over Alleged Harassment
Sanwo-Olu Warns against Corruption As He Swears In Cabinet Members