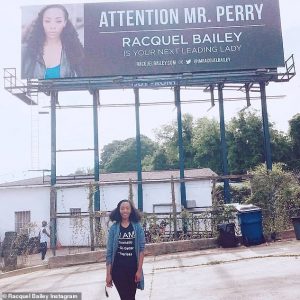 Working out: In addition to her new role in the Sistas finale, Racquel got at least 20 auditions and booked two other parts thanks to the billboard

Tyler Perry, 49, had a run-in with rising actress Racquel Bailey earlier this summer when he spotted a billboard in Atlanta that specifically called out to him. If you missed the initial story read  HERE

In June, Tyler publicly (though politely) chastised the actress for escalating her attention-grabbing tactics. 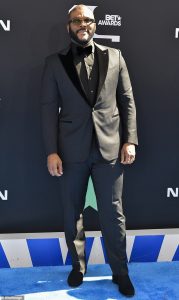 ‘This is not the way to get my attention if you’re looking for a role in one of my shows. Please DON’T DO THIS, SAVE YOUR MONEY!! This is the third time that someone has done this. PLEASE STOP! To audition is FREE!! I’m sure you can use that money for a better purpose,’ he wrote in the lengthy caption.

‘And by the way, you were great in THE NIGHT OF! It was my favorite show a couple years ago. I ALREADY SAW YOU!! So just audition and keep your money!! Again, I appreciate your effort, but that’s not the way to work for me,’ he wrote.

‘God bless you dreamer. I have no doubt you will make it one day!!’ he added.

His words of encouragement panned out, and Racquel not only got an audition but ended up booking a part for the season one finale.

She reportedly plays a police officer who had a past relationship with one of the show’s leads, and there’s a chance she’ll return in season two.

‘Tyler Perry is one of the greatest filmmakers that there every will be, and as an actress, when he speaks, I should listen,’ she said in a video interview.

‘And I would be a fool if i didn’t. This was my leap of faith, my choice, something I had to do to stand out.’

It’s unclear if the auditions for her part were public or if she needed a special invitation to audition.

Still, she landed the part, so the the billboard’s attention may have had a positive influence.

In May, the Night Of actress revealed she had paid to plaster her face over a massive billboard in Atlanta, where Sistas is filmed.

‘My #LeapOfFaith. I’m just a mother wanting to show my children that I went for it all, that I chased my dreams. So one day, they’ll be able to do the same,’ she captioned a photo of the billboard.

‘Attention Mr. Perry. Racquel Bailey is your next leading lady,’ it read, accompanied by one of her headshots.

Later in May she shared a photo of a second billboard.

‘I forgot to mention that there is another billboard (smaller) put up yesterday as well. Yes people, there are TWO billboards currently up.. just want show my kids that I went for it and they can also… #MyLeapOfFaith #FaithJumper #WomanOnAMission.’ 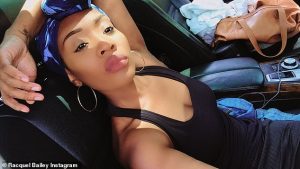 Coming soon: Tyler’s new series, which was ordered to series earlier this month, will follow a quartet of single black women as they navigate the pitfalls of dating, friendship, social media and unrealistic relationship goals

Though she’s not based in Atlanta, Racquel posed with her original Billboard the same month just to see it in person.

he tactic ultimately paid off (even if Tyler wasn’t happy about the precedent it set).

In addition to her part on Sistas, Racquel booked at least 20 auditions thanks to the billboard’s publicity, and she was cast in two roles prior to her Sistas work.

Tyler’s new series, which was ordered to series earlier this month, will follow a quartet of single black women as they navigate the pitfalls of dating, friendship, social media and unrealistic relationship goals.

Talk about taking a leap of faith that worked out!

Continue Reading
You may also like...
Related Topics:Tyler Perry