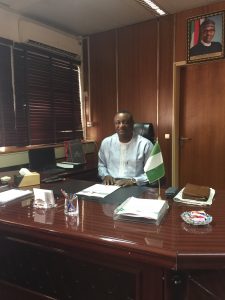 Nigerian lawyer, Festus Keyamo on Thursday shared his first picture in office as Minister of State for Niger Delta Affairs.

He affirmed that his law offices continue to run at full throttle with capable hands, as he takes a “short leave” of absence to serve his country.

“Arrived my new office punctually this morning, which is key to motivate the workforce. It is a new challenge which I always wanted to experience. Whilst my law offices continue to run at full throttle with capable hands, I take this short leave of absence to serve my fatherland.”

49-year-old Keyamo, a lawyer, social crusader, critic, and columnist until his new appointment was the Director, Strategic Communications in the re-election bid of President Muhammadu Buhari.

He was born at Ughelli, a town in Delta State southern Nigeria but his father hails from Effurun, a city in Delta.

Keyamo had his primary education at Model Primary School and secondary education at Government College, Ughelli, where he obtained the West African School Certificate in 1986.

He proceeded to Ambrose Alli University at Ekpoma, in Edo State southern Nigeria where he received a Bachelor of Law degree in 1992 and was called to the Nigerian Bar on December 1993.

Continue Reading
You may also like...
Related Topics:festus keyamo