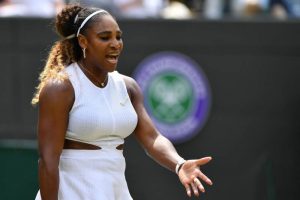 Serena Williams has been fined $10,000 by the All England Club for damaging a court during practice before the Wimbledon tournament started.

The damage is said to have happened on a Wimbledon tennis court during a pre-tourney practice session.

The All England Club, the organisation which hosts Wimbledon is said to take its grass courts seriously. However Serena won’t have to worry about the fine as she has already made $367,000 for getting to the quarterfinals.

The mother of one has won her first four matches so far at Wimbledon, losing only one set on her way to the quarterfinals. She also won her first mixed doubles match with Andy Murray in straight sets.

Williams was however not the only player fined.

Fabio Fognini was fined $3,000. The Italian said during his third-round loss that he wished a bomb would hit Wimbledon.

Continue Reading
You may also like...
Related Topics:Serena Williams