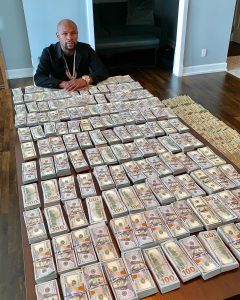 In a series of posts recently posted on his Instagram page, Floyd Mayweather has launched an attack on his critics, while posing with $2million in cash on social media.

Mayweather earned the moniker ‘Money Man’ during a glittering career in the ring where he remained undefeated from 50 fights.

He decided to show off his mountains of cash all in $100 notes – which totalled around $2million – in a post on Instagram.

And in a video, where he spoke about his wealth, he showed off a huge gold medallion around his neck, an Arnold Schwarzengger limited edition watch, sold for up to £52,702 online and the biggest Chanel bag in the store which he got from late fashion icon Karl Largerfield.

He wrote alongside the video:

I was once told that “the loudest person in the room is the weakest person in the room”. Well, that works for the individuals that’s doing something illegal. But in my case, I’m happy to flaunt my legal wealth and brag about being a black man that came from poverty, beat all odds and not give a fuck about what anybody thinks. Happy 4th, this is my independence! Now, let the fireworks begin!
#KarlLagerfeld
#TMT
#TBE
#TMG

In another post, a picture of him sitted with wads of cash, he wrote:

This is what I’ve been hearing for 23 years… “All Mayweather does is brag about his cars, his jewelry, his mansions, his ladies, his clothes and his money “. And this is what Mayweather says back… “I’m happy y’all spent over 2 decades hating on me instead of building your own legacy ” 😂

Estimates of the 42-year-old’s net worth range from $700m to $1bn and he has developed a reputation for flaunting his wealth over the years.

In March he showed off his customised private jet, diamond encrusted jewellery and a ’50-0′ jacket at his Las Vegas strip club.

Last year he dumped a bagful of cash onto a department store floor during a private shop.

Continue Reading
You may also like...
Related Topics:Floyd Mayweather