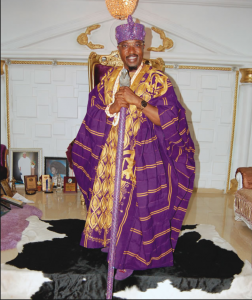 The Oluwo of Iwoland, in Osun State, Oba Abdulrosheed Adewale Akanbi, has appealed to traditional rulers in Yorubaland to denounce their membership of secret societies.

In a statement made available to the press, Alli Ibraheem, the Oluwo tasked traditional rulers to rescue Obaship and liberate the institution from slavery imbued by secret society’s dominance.

Oba Akanbi called on the Alaafin of Oyo, Oba Lamidi Adeyemi; the Awujale of Ijebuland, Oba Sikiru Kayode Adetona and Oba Rilwan Akiolu of Lagos to defend their long reign status in the council of traditional rulers by leading monarchs out of slavery of secret societies.

“What influence, recommendation, authority, power, money, contract and luxuries are you still searching outside such an assembly?

“God has divinely made us to install other leaders but because we run blindly, secret societies have hijacked our roles, subjected some Obas to their interests and most worrisome, are now crowning Obas for themselves – Obas with neither domain nor territory.

“Secret societies have stolen kings’ rights. The only way is a revolution to be led by a valiant and a leading Yoruba monarch. I see Alaafin and Awujale having that courage. Baba Alaafin can lead this campaign with Awujale as monarchs with a lot of history.

“I want to task Alaafin to lead the revolution at liberating monarchs from growing decimation of their influence occasioned by membership of secret societies. If Baba Alaafin refuses, I will start the revolution. I’ve Obas willing to follow.

“If Alaafin, Awujale and Akiolu are ready, I pledge my unalloyed support at all costs. The institution is one and must be defended at this precious time.

“The best to achieve this is through launching of Central Council of Yoruba Obas (Ijo Oba). The body (Ijo Oba) will be supreme council for discussion of Yoruba affairs and apex decision organ in the land.

“It will comprise only Obas and must mandated those willing to join to renounce membership of any secret societies. I’ve the trust in the capacity of Alaafin, Awujale and Akiolu to live up to expectation and lead the revolutionary liberation from the subjects turning themselves lords.

“We will leave this in the hands of these two monarchs coupled with us, new generation monarchs’ wisdom because ‘Omode gbon, agba gbon ni afi da ile Yoruba.’ Awujale and Alaafin have lots of history we can use as reference points.

“You can be member of any secret cult before enthronement as a king but must renounce membership the day you are proclaimed. Secret cults influence your influence, even to the distaste of your subjects and domain. They control you with false claims and alarm.

“Most of these secret groups have leaders who are ordinary subjects of king but subject kings under them to their dictates and directives even in conduct of his community affairs. Many of our subjects have infiltrated cult group to pulverise the image of kings.

“Obas were the ones given ministerial appointments in the past which Oluwo of Iwoland was one of the Ministers without portfolio and third on the list in the old western region.” (Daily Trust)

Continue Reading
You may also like...
Related Topics:Oluwo of Iwo

Nigeria Is Worse Off Than It Was In 1993 – MKO Abiola’s Son, Abdulmumuni
Nollywood Actor Fasasi Olabankewin AKA Dagunro Is Dead