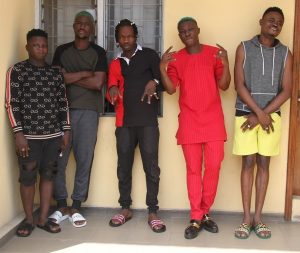 Nigerian musician Zlatan Ibile and three others he was arrested with have been released by the Economic and Financial Crimes Commission, EFCC.

The ‘Gbe Bodi e’ crooner was released after spending 5 days in EFCC custody.

Sources in the know say, Zlatan, Rahman Jago, new internet sensation Guccy-brand and 1 other were freed on “bail” after the intervention of a Senior Advocate of Nigeria that Davido hired for them, but they still have to report at the EFCC’s office, daily, till the end of the saga.

The fifth person, Singer Naira Marley who was arrested alongside Zlatan Ibile is still in EFCC custody. He remains in incarceration allegedly because of incriminating materials found in his laptop.

In a statement released, the Economic and Financial Crimes Commission, EFCC, Lagos Zonal office, arrested the two artistes, Afeez Fashola (aka Naira Marley) and Omoniyi Temidayo Raphael (aka Zlatan), in connection with alleged case of internet fraud and money laundering. Intelligence report had also linked them to cybercrime offences.

They were arrested along with: Tiamiu Abdulrahman Kayode aka Rahman Jago, Adewunmi Adeyanju Moses and Abubakar Musa.

Continue Reading
You may also like...
Related Topics:ZLATAN IBILE

Chris Attoh’s Wife Bettie Jenifer Was Married To Two Men Simultaneously, The Other A Druglord
“Afrobeat Is About To Switch Home Base”- Seun Kuti As He Reacts To Akeredolu’s Plans To Grow Marijuana In Ondo