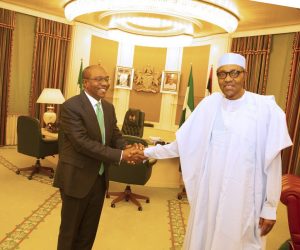 The Senate on Tuesday began screening on the renewal of the appointment of Godwin Emefiele, as Governor of the Central Bank of Nigeria (CBN) for a second term in office.

This followed a motion under executive communication moved by the Senate Leader, Ahmed Lawan and seconded by Sen. Philip Aduda (PDP-FCT) at a plenary presided over by Senate President Bukola Saraki at the red chamber in Abuja.

It will be recalled that President Muhammadu Buhari had on May 8 written to the Senate on his reappointment of Emefiele as CBN governor for a second term of five years following the expiration of his tenure on June 2.

“It is my hope that the Distinguished Senate will consider and confirm the nominee in the usual expeditious manner.”

The Senate, at today’s plenary, commenced legislative work on the request.

Sen. Lawan (APC-Yobe) presented the executive communication, which is on item one of the Orders of the Day, to the lawmakers.

“I present the executive communication to the house, that the Senate do consider the request of Mr President C-in-C on the renewal of the appointment of Godwin I. Emefiele as Governor of the Central Bank of Nigeria in accordance with Section 8(1) and (2) of the CBN Act 2007,” he said.

After it was seconded by Aduda, the senate president referred the executive request to the Senate Committee on Banking and Finance for further legislative action and report back to the house.