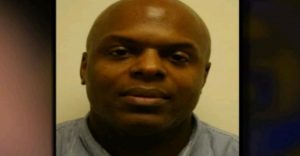 A 47-year-old DrugLord Kedrick ‘Pretty Ricky’ Jenifer has been identified as the other man who was also married to Bettie Jenifer, the murdered wife of Ghanaian actor Chris Attoh.

Kedrick Jenifer is currently serving a 20-year prison sentence for importing large amounts of cocaine into Baltimore from Texas.

According to the U.S. District Attorney’s Office, the kingpin’s “Jenifer drug trafficking organization” distributed at least 450 kilograms of cocaine in Baltimore and Woodbridge, Virginia.

“Kedrick Jenifer lived large as a major Baltimore drug dealer, but now he will lose all of his toys and live for two decades in federal prison”.

Greenbelt Police Department statement issued on May 11, states that Bettie Jenifer had been chased through the parking lot of her office building at around 5:00 p.m. before being shot in the head in a targeted and not a random incident. They are however yet to name a suspect or motive in the case.

A spokesperson for Attoh’s talent agency gave the following statement:

“Waka Talent Agency is saddened by the death of Bettie Jenifer, who was married to our client, Mr. Chris Attoh. We would like to note that the family has requested to mourn in private and therefore will not be doing any press interviews or commenting on the death.”