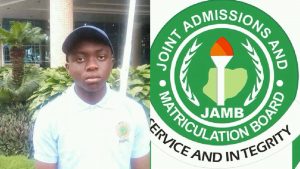 Ekene Franklin, the teenager who emerged with the highest score at JAMB’s 2019 UTME has cried out after finding out he cannot be admitted into his school of choice because of his age.

The 15 year teenager  is affected by a law made by his first school of choice-University of Lagos-UNILAG, which stipulates that the institution will only admit students aged 16 years and above.

Despite the standing law, Ekene still believes something could be done. Speaking to Daily Sun he said:

“I know it is their law and, if it is the will of God, something can done to change the situation. I know I cannot change the law on UNILAG admission criteria. But I hope someone can come to my aid on this age issue,” says Ekene.

“Initially, I wasn’t aware of the UNILAG law which states a student must be 16 years old. Based on that I picked UNILAG as first choice. It is the university law, no one is above it. If I don’t get support from government or JAMB on the age issue, I may wait for next year to write another UTME but if I get scholarship I will accept it. I prefer scholarship that will enable me travel abroad.”

Ekene speaking to Daily Sun said his focus is to get a scholarship and go abroad to study Chemical Engineering at MIT.

The 15-year-old student from Imo State, who is currently writing the May/June 2019 West African Senior School Certificate Examination (WASSCE) however says if he does not get admission or a scholarship, he will prepare for another UTME next year.

“But I don’t want to waste my high score,” he reiterated.

The full breakdown of Ekene’s UTME result saw him emerge the highest scorer with 347, with the following subject scores:
English- 78,
Mathematics- 91,
Physics-86 and
Chemistry, 92.