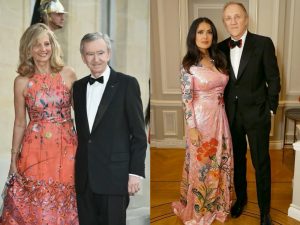 Two of France’s billionaires have promised the sum of €300m to rebuild the monumental Notre Dame Cathedral which was Monday ravaged by fire.

France’s richest man Bernard Arnault, head of the LVMH luxury goods group pledged €200m towards the restoration of the 850 year old Cathedral in Paris, doubling the earlier  donation by Salma Hayek’s business tycoon husband Francois-Henri Pinault. Pinault had on Monday- hours after the fire- pledged €100m towards the rebuilding of the Cathedral. 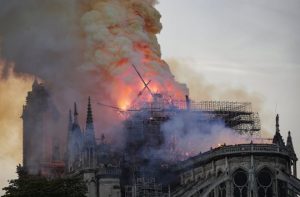 An international fundraising appeal has been launched to help rebuild the Notre Dame (Picture: EPA)

‘The Arnault family and the LVMH group, in solidarity with this national tragedy, are associated with the reconstruction of this extraordinary cathedral, symbol of France, its heritage and its unity.

‘In the meantime, the LVMH Group puts at the disposal of the state and the concerned authorities all its teams, creative, architectural, financial, to help the long work of reconstruction on the one hand, and of fundraising on the other hand.’ 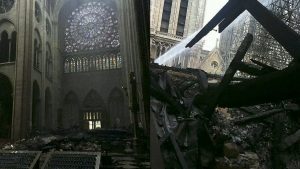 The pledge from the two Billionaires came after an appeal was made by the French President Emmanuel Macron on rebuilding the cathedral, one of the most visited tourist centres in the world.

Meanwhile, France’s Fondation du Patrimoine, a private organisation which works to protect French heritage, said it would be starting an international appeal. It tweeted:

‘For our Lady to be reborn from her ashes we are launching an international appeal. All donations received will be paid in full to the restoration site.’

President Macron also said he would be looking ‘beyond our borders’ as the fundraising campaign got under way. 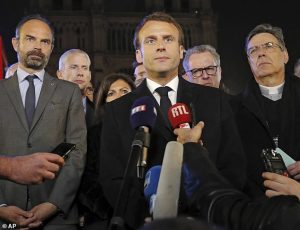 In an emotional speech on Monday night, he said:

‘I am solemnly telling you tonight: this cathedral will be rebuilt by all of us together.’ Describing Notre Dame as ‘our history’ and ‘the epicentre of our lives’, he added: ‘It’s probably part of France’s destiny and it will be our project for the years to come.’

Specialised craftsmen and rare materials are expected to be needed to restore the monument, which welcomes more than 13 million visitors each year – an average of more than 35,000 people a day.

The head of a French lumber company told FranceInfo radio that it was ready to offer the best oak beams available to rebuild the intricate lattice that supported the now-destroyed roof, known as the ‘Forest’.

‘The work will surely take years, decades even, but it will require thousands of cubic metres of wood. We’ll have to find the best specimens, with large diameters,’ Sylvain Charlois of the Charlois group in Murlin, central France, told the radio station.

Firefighters confirmed on Tuesday morning the blaze had totally been extinguished after battling the fire throughout the night.

The cause of the blaze was not immediately confirmed. The cathedral had been undergoing intense restoration work which the fire service said could be linked to the blaze.

French prosecutors said it was being treated as an ‘involuntary’ fire, indicating that foul play was ruled out for now. The fire is said to have started in the attic of the monument before spreading across the roof.

Continue Reading
You may also like...
Related Topics:Notre Dame cathedral