Tears flowed freely, today, as Kolade Johnson, who was murdered by a trigger-happy SARS operative while watching a football match in Lagos, was laid to rest.

The father-of-one was buried earlier today, at the Atan cemetery in Yaba, Lagos.
Meanwhile, the ex police inspector, Ogunyemi Olalekan, who was sacked for killing him, is currently facing a murder charge.

His family members also called for the immediate reform of the Nigerian Police Force to stop the menace of police brutality in the country. 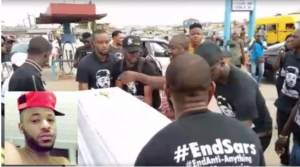 At about eleven in the morning, the casket containing Kolade Johnson’s corpse arrived at the Atan cemetery, Yaba accompanied by a long convoy of family members, friends, and sympathizers.

Kolade’s body was then taken by his friends to the tomb where he will be buried.

In a short sermon, the officiating minister admonished the youths to stay away from vices capable of destroying their lives, saying they should all endeavor to live a life worthy of emulation.

While Kolade Johnson was lowered into the grave, his junior brother, Dipo Johnson was then called upon to perform the dust to dust rites.

Kolade’s aunt and others who spoke described the late Kolade Johnson as a gentleman to the core and called for prompt justice.

On how justice would come, Wale Ademoyejo who is the family solicitor expressed confidence that Kolade’s case would not be swept under the carpet.

Late Kolade Johnson is one out of many Nigerians who have suffered police brutality, but how soon government and the police leadership would put a stop to such innocent killings of Nigerians remains to be seen. 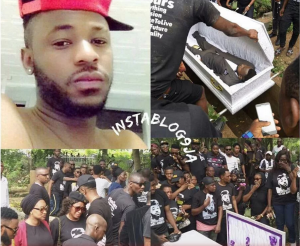 Continue Reading
You may also like...
Related Topics:Kolade Johnson