‘I’m Fighting For My Life!”- R-Kelly Weep In First Interview As He Opens On Under Age Sex Allegations 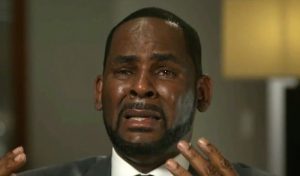 American singer, R. Kelly after being charged with aggravated sexual abuse denied the charges angrily in an interview before crying “I am fighting for my f****** life.”

According to the law, R. Kelly is bound to face up to 70 years behind bars if found guilty and he ‘exploded with rage’ during his interview on CBS This Morning.

During the interview with “CBS This Morning” host Gayle King, which lasted an hour and 20 minutes, the R&B superstar refuted accusations that he had sexual relations with underage girls, calling them lies.

“People are going back to my past,” he said in the first clip released from the interview. “They’re going back to the past and they’re trying to add all of this stuff now to that—to make all of the stuff that’s going on now feel real to people.”

When King said his past he meant when he was acquitted on child pornography charges in 2008. 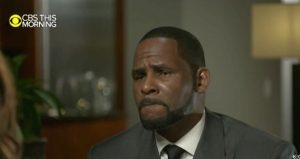 On the sexual abuse stories, Kelly also said breaking down in tears:

When asked if he held women against their will, Kelly fired back.

“I don’t need to. Why would I? How stupid would it be for R. Kelly, with all I’ve been through in my way, way past to hold somebody—let alone four, five, six, 50 you said, how stupid would I be to do that? That’s stupid guys.”

He then looked directly into the camera and pleaded his case.

“Use your common sense. Forget the blogs. Forget how you feel about me. Hate me if you want to, love me if you want to. But just use your common sense. How stupid would it be for me with my crazy past and what I’ve been through. Oh, right now I just think I need to be a monster and hold girls against their will, chain ’em up in my basement and don’t let ’em eat and don’t let ’em out, unless they need some shoes down the street from they uncle. Stop it.”

With tears in his eyes, an emotional Kelly declared his innocence.

The singer surrendered to police on 10 counts of aggravated criminal sexual abuse on Feb. 22. The charges involve four women, three of whom were underage at the time of the alleged events. Kelly was released after spending the weekend in jail and posting $100,000 of his $1 million bail.