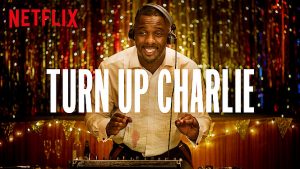 Saw a friend talk about Turn Up Charlie day before yesterday on social media and decided to give it a try, mainly because it was just 8 episodes of less than 30 minutes each, and of course it stars Idris Elba.

In the Netflix original, Elba (also one of the show’s creators) plays Nigerian Charlie Ayo – a struggling DJ who lives with his Nigerian Aunty in London. He reconnects with a childhood friend, a Hollywood Superstar married to a world famous DJ and the duo have an 11 year old problem-child daughter.

Things get interesting when Ayo by chance becomes the Manny to his friend’s precocious daughter, while also trying to resuscitate his career by working with his friend’s famous DJ wife and the show takes off from there.

When I remember Turn Up Charlie, two words come to mind, sweet and heart warming. It showed Idris Elba’s paternal side, a glimpse of which we saw 12 years ago in Tyler Perry’s Daddy’s little girls. Since then, Elba has done more of action movies, so seeing him play and interpret remarkably this very relatable character was very refreshing to watch.

What makes it even more endearing is the fact that he plays a Nigerian. Also his over the top, hilarious  Aunt added to the mix and heightened the show’s comic value. My only problem was the ridiculous accent which they claimed to be Nigerian. However after a couple of episodes I got used to it and just went with flow.

Aside the comic side, I liked how show explored the themes of love and family over money, and hope in pursuing dreams. Elba who was a DJ and one hit wonder struggled with a making a come back in an era way ahead of his time, as well as confronting his demons majorly his ego. Also despite having no kids of his own, he had to cope with dealing with a precocious, entitled little girl who came from a life privilege in Hollywood. But did he succeed?

Find out how it all played out, and see Elba in perhaps his most interesting role in years, which endeared me to him as an actor, more than any other movie he has starred in in recent times.

Turn up Charlie is a must watch. Trailer below:

Have you seen this show? If no will you be giving it a shot?

Continue Reading
You may also like...
Related Topics:IDRIS ELBA, latest, Turn Up Charlie