How I Got The Nickname MC Oluomo – NURTW Boss Reveals 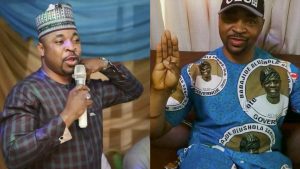 NURTW boss, Musiliu Akinsanya popularly known as MC Oluomo has revealed how he got his popular monicker. In a new interview with City People, MC Oluomo who recently survived a serious stab wound which led to him being flown abroad also spoke about his life growing up as a child in Oshodi.

Excerpts from the interview below

How did he come to bear the nameC Oluomo?

“The name MC that people call me started from when I was in school. It was one big woman who named me MC when I was young. She is now in Canada. She is a Mama Alaye. Then, when we were young we used to play a game called Game and Watch. My name is Musiliu but she turned it into MC. We used to move from school to school challenging ourselves so she would tell people to go meet that MC Boy. That was how the alias stuck.

What is his relationship like with the former Lagos NURTW Chairman, Olorunwa?

“Me, MC Musiliu, I don’t fight people. I don’t disagree with people in such a way that you can’t be friends again, because all these fights are not worth it. We would all go one day and when we do, it is only 6 feet. Not more than that. If I meet him I will greet him. We may not have rapport because my loyalty is to my current boss, Alhaji Tajudeen Agbede. I can’t pay loyalty to another person.”

Where was MC Oluomo born?

“I was born at No.11 Oshodi Road, at Agbo ile Atere. My daddy is from Ejigbo, Lagos State. I related to Ejigbo, Isolo, Oshodi, Igbeba. Those are the 4 areas I am linked with. But really I was born in Oshodi. That is where my father was born. My dad and some others established that place. My dad married from Agedegbe family and he had a child from there. That is why all the Obas of that area honoured me with the Oluomo title.

About 22 Kings honoured me then. It was at Isolo, at Oba Kabiru Agbabiaka. I have the certificate with me. I grew up in Oshodi. But when my dad died, my mum took us away from there because of the polygamous nature of the house. At that time, I was at Afolabi Primary School in Oshodi. I was in Primary 3 then at the time my dad died.
My mum now took me to Abeokuta, her hometown. I was in Abeokuta when I did my Primary 6, at Olu Efon Primary School in Abeokuta.
When he was young did he ever think he was going to be this successful and popular?

“Yes and No,” he says. When I was young, the story my mother told me was that whenever I am coming back from school my school mates will follow me home and that is where they will all eat lunch before they then disperse to go to their various homes.
Even my first wife, Alhaja Modinat Adunni Akinsanya and I met in Primary School when we were very young. Then, we would hold ourselves. She went to Methodist Primary School. I went to Afolabi Primary School. And she is still my wife till today.

My mum used to tell me that people always gather round me, that they always wanted to stay with me, to play with me and we would play with sand. She will be selling her wares in front of the house on Oshodi Road in those days. She said also when I was in Primary 5 in Abeokuta; my school mates also liked me then. But I never thought it will turn out this way. When I got to Primary 6, I now realized that my mum could not pay my way any longer through school, so I became a Conductor then at Adatan. They used to call it Interstate then. We would sit on the bonnet. I used to hang around those boys at that Adatan Filling Station. Once I get there a lot of boys will gather round me.
But despite the fact that I grew up on the street, as a Conductor till now I never joined my contemporaries to smoke Indian Hemp or even Cigarette, or take alcohol. Many people are always surprised. They are always shocked to hear this.”

“Why I Am Passionate About Bridging Communication Gap” – Veteran Broadcaster,…

“Why We Have A Lot Of Badly Edited Movies In Nigeria” – Nigerian Video Editor, Mark…

“You Can’t Make Money And Get Fame Simultaneously, You Have To Pick One” — Upcoming…