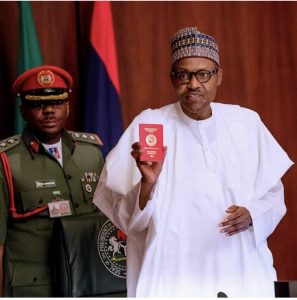 – The Federal Government yesterday launched a new 60-page Nigeria international passport with 10-year validity
– The President and his Vice received their own diplomatic variant of the passport at the Presidential Villa
– New Passport was presented to the President by Minister of Interior, Mr. Abdulrahman Dambazau and Comptroller General of Nigeria Immigration Service (NIS), Mohammed Babandede
– The passport has an enhanced self-tracking application, is weather friendly and has polycarbonate technology that eliminates damage
– 32-booklet standard passport will cost N25,000($30 dollars abroad), 64-booklet passport for five years N35,000($150 dollars abroad),64-booklet passport with 10-year validity would cost N70,000 in Nigeria(230 dollars abroad)
– Nigeria will begin using the new passport by December 2018

The Federal Government on Tuesday launched a new 60-page Nigeria international passport. The passport will have a 10 year validity.

President Muhammadu Buhari and the Vice President Yemi Osinbajo received their own passports, the red diplomatic variant issued by the Nigeria Immigration Service (NIS) at the Presidential Villa, Abuja.

The passports were presented to the duo by the Minister of Interior, Mr. Abdulrahman Dambazau, assisted by the Comptroller General of Nigeria Immigration Service (NIS), Mohammed Babandede. 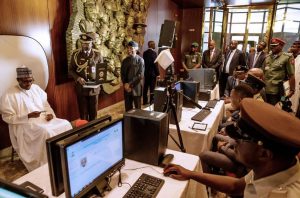 Speaking to State House correspondents after the presentation, the minister, who narrated the origin and history of passport in the country, Nigeria, said apart from the 10-year validity, the new passport has an enhanced and self-tracking of application.

He said the new passport meets the specifications of the International Civil Aviation Organisation (ICAO).

“Now, you know things are dynamic and International Civil Aviation Organisation (ICAO) also brought up additional security features which we have to comply as early as possible for various reasons. 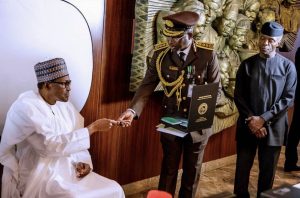 “We have series of cross border issues to deal with and series of challenges in terms of border security and management and one of the best way to do that in additional to biometric we have introduced is to ensure that our passport contains all these security features,’’ he said.

He added that the passport is weather friendly and has polycarbonate technology that eliminates damage and will save Nigerians in diaspora the trouble of frequently visit Nigerian embassies in search of new passports.

The Comptroller General of Nigeria Immigration Service while speaking said the NIS had in October 2018 announced that Nigeria would begin using the new passport by December 2018. 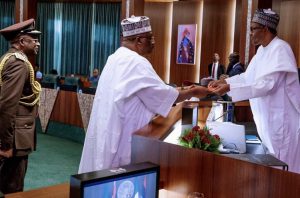 He said the diplomatic passport, which is free of charge, is meant for members of the diplomatic corps and is owned for life by serving or former presidents of the country. 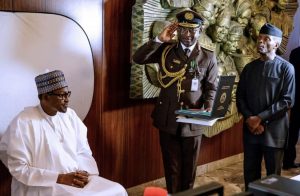 The red diplomatic passport also has ten years life span.
The new passport, he said, will work concurrently with the existing passports.