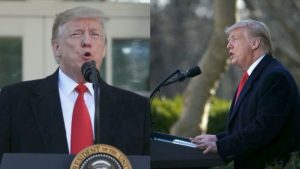 Donald Trump has backtracked on a key promise to build a wall spanning the US border as he revealed plans to reopen the government. Speaking outside the White House Rose Garden Friday, the president appeared to climb down on his flagship election policy, saying: ‘We do not need 2000 miles of concrete wall from sea to shining sea. We never proposed that. We have barriers at the border where natural structures are as good as anything we can build. Trump – who previously demanded $5.7 billion for a wall separating America from Mexico, went on to claim that he had no plans to build ‘medieval walls’, as he announced plans to reopen the US government without any funding for the barrier.’

Unveiling his plans for a steel slat fence – less than a year after inspecting solid ‘wall’ prototypes he vowed to build, Trump continued: ‘They are smart walls, designed to meet the needs of front line border agents…made of steel, have see-through visibility and have cutting edge drone technology.’ The president also appeared to suggest that existing natural borders in some areas would offer the same protection as a wall. He did so while announcing plans to reopen the government for three weeks, and claimed he would trigger another shutdown if his terms still aren’t met. Before signing the bill, Trump said that he would accept a ‘large down payment’ on the wall as part of the compromised. When asked about the down payment, US Speaker of the House Nancy Pelosi replied ‘I don’t know if he knows what he’s talking about, do you?’

For the duration of the shutdown, Trump, a Republican, has been unable to agree to border wall funding on his terms with the rival Democrat party. He has been forced to negotiate with them after they took control of the US Congress’ lower House of Representatives following the November 2018 midterm elections. Their refusal to approve $5.7 billion for the wall on Trump’s terms prompted him to shut the government down. The short-term bill would not provide funding for the border wall and would include a way for Congress to negotiate a Department of Homeland Security appropriations bill, which would open lines of communication for the wall’s funding.

Trump’s announcement came as new ABC News/ WaPo poll found that 53 percent Americans blamed Trump and Republicans in Congress for the shutdown – and 60 percent disapproved of how he handled efforts to end it. ‘In a short while I will sign a bill to open our government until February 15. I will make sure all employees receive their back pay very quickly or as soon as possible,’ Trump said. ‘After 36 days of spirited debates and dialogue, I have seen and heard from enough Democrats and Republicans that they are willing to put partisanship aside, I think, and put the security of the American people first.’ ‘They have said they are for complete border security… and they have fully acknowledged that having barriers, fences, walls or whatever you may call it will be an important part of the solution,’ Trump continued.

Trump said that over the next three weeks ‘he hopes Democrats and Republicans will work in good faith.’ ‘If we make a fair deal the American people will be proud of their government for proving we can put country ahead of party,’ he said.

Continue Reading
You may also like...
Related Topics:Donald Trump