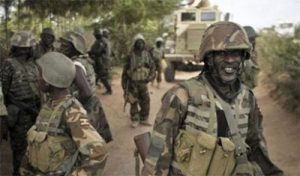  Saturday vanguard gathered that the armed herdsmen had sneaked into the area from neighbouring Nasarawa state and set up a camp in the area preparatory to launching an attack on the community when the troops were alerted of their presence.

When contacted, Commander of the military operation, Maj. Gen. Adeyemi Yekini who confirmed the development said his personnel responded swiftly to a distress call from the area and after a gun duel dislodged the armed herdsmen.

Gen. Yekini said, “our troops conducted an overnight operation during which an open camp set up by some armed herdsmen along River Benue bank at Anyiibe was destroyed.

“Some of the armed elements that attempted to cross back into Nasarawa state got their boat capsized during the exchange of fire. It is therefore likely that the armed group might have suffered some casualties during the encounter.

“Our troops that participated in the operation did not sustain any casualty and no civilian was killed during the incident contrary to the rumours of purported civilian casualties,” he added.

The latest development is coming just when persons displaced as a result of the lingering crisis were being encouraged to vacate the various Internally Displaced Persons, IDPs, camps and return to their ancestral homes. (Vanguard)

Yuletide: Police Warn Against Use Of Fireworks, Explosives
Teenage Dad Jailed For Life For Biting And Killing His Baby