Speaker of the Imo State House of Assembly and 18 other lawmakers defect to Action Alliance, AA denouncing their memberships of the All Progressives Congress and the Peoples Democratic Party respectively. 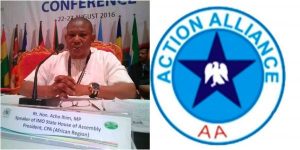 The Speaker of the state House of Assembly, Acho Ihim, announced this while during plenary on Thursday evening, Daily Post reports.

Speaking after the notice of defection was read, one of the defectors, Amuka, a former member of APC, accused the national chairman of the ruling party, Adams Oshiomhole of “collaborating.”

Continue Reading
You may also like...
Related Topics:news, Politics