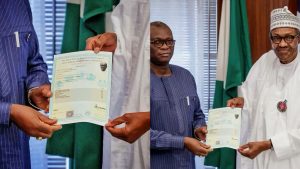 Following yesterday’s presentation of WAEC attestation certificate to President Buhari. WAEC has now explained why the President’s current passport photograph appeared on the certificate. Read below:

WAEC has said that the media frenzy that trailed its presentation of its certificate to President Buhari at the Villa on Friday was unnecessary.

In a short telephone interview with Saturday Tribune on Friday, the Head of Public Affairs Division of WAEC in Nigeria, Mr Demianus Ojijeogu, said what the body presented to the president was an attestation of result, and not a certificate.

“The Registrar to Council, Dr Iyi Uwadiae, and in company of the Head of National Office of WAEC in Nigeria, Mr Olu Adenipekun, went to the Villa to present not a certificate but an attestation of result.

“When we issue attestation of result, it comes with a passport photograph of the candidate. It’s not a certificate,” he said.

When did the president apply for it?

Saturday Tribune probed further. To this, the WAEC spokesman said what was important was that the president applied, and was issued his attestation of result.

“We can’t be saying he applied yesterday or day before yesterday; the only thing is that he applied, and we must give honour to whom honour is due as the president of the country. There is nothing wrong in that (taking the document to the Villa),” he said.

The photograph on the document issued to the president has also been an object of controversy with many saying that it was incongruous that the Buhari’s 1961 ‘certificate’ would bear the image of an adult Buhari.

But Demianus also explained this.

Asked in another discussion why it is now that WAEC is giving Buhari attestation of result and not much earlier, he said Buhari didn’t apply for it until now.

On when Buhari collected the original certificate, he said since the examination was a school-based one, the candidate collected it from his school and WAEC would not know when he did so.

In his remarks earlier at the Villa, WAEC Registrar, Uwadiae, said it was possible for candidates to lose their examination certificates through fire or any other unfortunate incident.

“We don’t issue certificates twice but we can issue attestations or duplicate copy of the certificate.

“We also have what we refer to as confirmation; usually, universities were using this in those days when Information Technology was not in vogue.

Continue Reading
You may also like...
Related Topics:Buhari, certificate, WAEC