The Cowbellpedia Secondary School Mathematics Television Quiz Show has met its stated objectives of providing a platform to identify and reward excellence in Mathematics and to stimulate the interests of many students in the subject area. 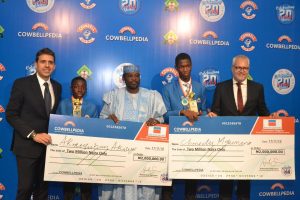 “This was the submission of the Managing Director of Promasidor Nigeria Limited, Mr Anders Einarsson, while speaking to journalists at the finals of the 2018 Cowbellpedia Mathematics competition in Lagos last weekend

Einarsson disclosed that from its beginning in 1998, Cowbell and Mathematics has expanded in size, scope and prizes as it now holds in over 200 centres across the nation and in over 11,000 schools.

He added that in the last 20 years, the initiative has produced champions and heroes, citing the case of Munachi Ernest-Eze, a student of Loyola Jesuit College, Abuja who set a record last year by winning both the junior and senior categories of the Cowbellpedia Secondary School Mathematics Television Quiz Show within a period of two years.

“>Another hero, he further said, is Faith Odunsi, a student of The Ambassador College, Ota Ogun State who set a new competition record in speed and accuracy by answering 19 questions in the “60 Seconds of Fame” segment to advance to the semi-finals of this year’s edition in the junior category.

“My impression of today’s event is that I feel very great and excited about the outcome. The contestants have all shown brilliance. It is great because this has reinforced our belief that the future of Nigeria is indeed very bright,“he said.

“>Meanwhile, a major highlight of the finals was the emergence of Akinfoluhan Akinleye from The Ambassadors College, Ota, Ogun State and Chinedu Mgbemena of Graceland International School, Port Harcourt, Rivers State as 2018 champions in the junior and senior categories respectively.

In the fight for the junior category crown, Akinfoluhan overwhelmed Splendour Nwankwo of Jesuit Memorial College and Favour Okarike of Graceland International School, both in Port Harcourt, Rivers State, who ended up as first and second runners-up respectively.

Consequently, this put a lid to the dream of Chidozie Uzochukwu of Nigerian Tulip International School, Abuja; Gabriel Akogun from Welkin International and Loluwa Abiodun of The Ambassadors College, both in Ota, Ogun State, who also lost in the first round of the final.

In chat with newsmen after the event, Akinfoluhan dedicated his victory to his father and his Mathematics teacher, Kayode Adebayo. “I feel very great to be the champion, especially being my first time of participating in the competition. I am happy, my father will be so happy,” he said.

The pulsating senior category challenge saw Chinedu shrugged off the challenge by other finalists. A second timer in the competition, Praise Isinkaye from Federal Government Academy, Suleja, Niger State emerged the first runner up, while the second runner-up position went to Juliet Ekoko, the 2016 junior category champion, from The Amabssador College, Ota Ogun State.

Other contestants got to the final were Jessica Austine, from Federal Government College, Owerri, Imo State; Enoch Adenekan of The Ambassadors College and Nafisat Abdulwaheed from Reality High School, Ilesha, Osun State.

“Chinedu was thankful to God and his Mathematics teacher, Mr Christopher Olasupo for guiding him to through all the hurdles.

“I thank God today for making my dream to come true. I am proud to have made my parents proud,” he told journalists.

In fulfilment of Promasidor’s pledge to double the prize money as part of the 20 anniversary of Cowbell and Mathematics in Nigeria, the champions in both categories received N2 million each with an all-expense paid educational excursion outside the country; while the first and second runners-up got N1.5 million and N1 million respectively.

The teachers of the champions were also rewarded with N500,000, while those of the first and second runners-up received N400,000 and N300,000 respectively.

In his remarks, the Acting Registrar of the National Examination Council, Mr Abubakar Gana, who was represented by Mr Mustapha Abdul, the Director of Examination Development, commended Promasidor for the Cowbellpedia initiative and pledged its organisation’s continued technical support for the project.

Meanwhile, preparations have commenced for next year’s edition of the competition. According to the organisers, the 2019 Cowbellpedia registration portal is now open for secondary school students across the country to register.

Promasidor was founded in 1979 by Robert Rose, who left the United Kingdom in 1957 for Zimbabwe to pursue his African dream. It has since grown with presence in 25 African countries. Promasidor Nigeria has achieved tremendous growth since it commenced operations in 1993 with 6 product brands in the market.

Promasidor produce, distribute and market quality range of products such as Cowbell, Loya, & Miksi milk, Top Tea, Onga seasoning across the country bringing joy to millions of consumers. Its Milk powders, culinary and beverage products are affordable, delicious and good for all.