KOWA Party Will Not Condone Any Certificate Scandal In Govt, Our Screenings Are Competence And Capacity Based – Shina Fagbenro Byron 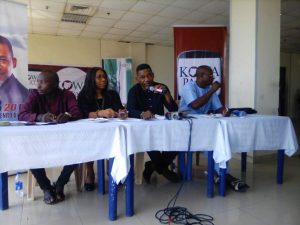 As activities leading to the 2019 general elections continue to occupy the front burner of national discourse, the Presidential Candidate of KOWA Party, Mr. Shina Fagbenro Byron, has revealed that his party will not condone any certificate scandals currently rocking the Buhari led administration.

He made this statement in Abuja during the media chat between KOWA Party’s candidates in the general elections and the media.

“KOWA Party strongly advocates the need for competence and capacity based screening exercise and possibly debates amongst Presidential candidates which will ensure that there are no cases of certificate scandals as we have with this government.”

Recall that the former Minister for Finance, Kemi Adeosun had to resign due to allegations of forgery of her NYSC certificate, while Minister for communications Adebayo Shittu is also embroiled in a similar issue after investigations by Premium Times revealed that he had skipped the compulsory one year National Youth Service.

Furthermore, Mr. Fagbenro also stated emphatically that only KOWA Party can truly restructure Nigeria owing to the fact that the idea of restructuring was a brainchild of the party. “The idea of restructuring had been long introduced in the KOWA Party manifesto long before it was highjacked by other political parties including the ruling party, and so we are in the best position to implement it if elected in 2019.”

Although he stated that this is in no way a form of campaign as INEC is yet to open the window for campaigns to begin nationwide, but he wishes to register his heartfelt condolences to the people of Kaduna, Benue, Plateau, NorthEast as well as all states that have been subject to consistent waves of violence across the country.

Mr. Fabgenro, also called on Civil Society groups and faith based organisations to speak out and reach out as I will support any governor or government in any peace building and conflict management processes public in place to stop the sad tendencies.

Condemning the spate of violence in different parts of the country, the Presidential Candidate stated that, “the current rate of human disasters and displacements as a result floods and other environmental challenges. The recent Niger Delta Flooding comes to mind and it saddens me and KOWA Party to again register condolences at a time like this to the numerous families that have lost their homes and livelihoods as a result of this flood.”

In view of the above, he however suggests some priority actions that need to be considered to prevent future occurrences.

— There is a need to dredge or result the Benue and Niger Rivers for free flow of water and marine vehicular movement.

— Complete Kashimbilla Dam to curtail the water over flowing from Lakdo dam in Cameroun.

— Clearing of existing canals and drainages through sanitation.

Mr. Shina Fagbenro Byron decried the problem of unemployment remains a clear and present danger to Nigeria’s socioeconomic development. With an unemployment ratio is about 30% and still rising under the current administration. A new leadership is required to show commitment to develop this critical demography consisting many of women and youths.

He said, “KOWA Party will only consider any coalition with a view to change the government and improve governance for the good of all. We will also be fully committed to establish an inclusive government that will prioritize and ensure political stability, economic prosperity and social harmony. Our coalition will also be void of judgemental or condemnatory tendencies against individuals or groups with divergent political view of others.”

“We were in talks with a coalition of Presidential Aspirants called Presidential Aspirants Coming Together PACT, we withdrew because we felt that it did not meet our requirement of clarity of purpose and decision making process and that we felt it was premature for PACT to seek to choose a consensus candidate while some members were yet to have party affiliation and primary elections were yet to be concluded.