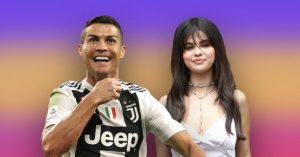 – Renown footballer Cristiano Ronaldo is now the most followed person on Instagram
– He surpassed Singer Selena as a result of her social media hiatus since September
– Both stars are at 144 million but Ronaldo has a few more thousands that’s puts him in the lead
– Other celebrities with massive following include Ariana Grande, Kim Kardashian and Beyoncé

The Portuguese athlete who left Spanish side Real Madrid after nine years and signed in July with Juventus in his home country on a 100 million Euros contract is now the most followed person on photo sharing social networking app Instagram.

The no 1 spot used to belong to Selena Gomez who is currently on a social media hiatus following an emotional break down.
Both celebrities have 144 Million, but as at press time Cristiano had a total of 144,403,3377 followers, a couple of thousands more than Serena’s 144,345,317. 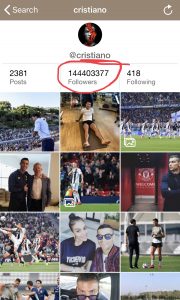 Meanwhile, Selena, 26, last posted to her Instagram on September 23.
She shared a selfie along with a message explaining her decision to take a step back from social media.
She wrote: ‘Update: taking a social media break. Again. As much as I am grateful for the voice that social media gives each of us, I am equally grateful to be able to step back and live my life present to the moment I have been given.’ 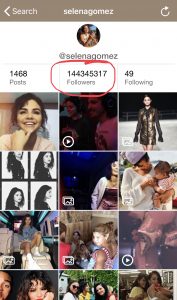 Selena also spoke about how she doesn’t care how many Instagram followers she has.
‘I don’t. I don’t care. I could have none tomorrow. Makes no difference. It’s just a number and it’s insane so many people are obsessed with a number. It’s like, chill out,’ she said.

Selena had owned the title of most followed person on Instagram since 2016 when she overtook her friend Taylor Swift.
Taylor currently has 112 million followers on the social media platform. Other celebrities with huge followings include Ariana Grande with 132 million, Kim Kardashian with 120 million and Beyoncé with 119 million.

For As God Lives, Atiku Will Defeat Buhari- Prophet Olagunju

This African Country Is About To Start Issuing Visa On Arrival