Prophet Defrauds Widow Of N18Million, Threatens To Kill Her 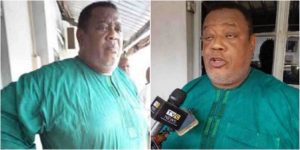 A prophet with the Celestial Church of Christ, Alfa and Omega parish, Cotonou, Republic of Benin, Peter Onunuju, has been arrested by the Police for allegedly defrauding a widow, Oluchi Grace, of N18 million, The Nation reports.

He was alleged to have swindled Grace with the intention of procuring a landed property for her at Lekki area of Lagos state.

Dan Okoro, the Commissioner of Police in charge of Force Criminal Intelligence and Investigations Department (FCIID), Alagbon close, Ikoyi, Dan Okoro, revealed the victim later discovered that the land belonged to his ex-wife. .

Okoro said detectives discovered that the suspect collected N16 million cash and asked the widow to pay the other N2 million into his bank account, adding that information gathered revealed that the suspect had other intention. .

“The so-called prophet took advantage of the relationship he has with Oluchi Grace to swindle her. From the beginning he had the intention of defrauding the woman.

Later, he started threatening to kill the woman and her children when they discovered that he had swindled them

The victim said she knew the prophet for over two decades and trusted him as a man of God. .

“I later discovered that the land in question belongs to his ex-wife who is remarried and based in the U.S with her new husband. .

My son discovered her contact from her Facebook account. When we contacted her, she told us she was not selling the said property. In fact she rained abuses on us. .

When the prophet realized that the game was up, he started threatening to kill us. That was why I ran to the police before anything happens to me or my children.”