The Lebanese drug dealer who was arrested at No. 18, Wahab Ogunbambo Street, off Simeon Akinlonu Crescent, Victoria Island alongside his Lebanese girlfriend and Nigerian driver, both suspected of being his accomplices, is being held at the NDLEA’s Nigerian Aviation Handling Company (NAHCO) Lagos Command, Ikeja. 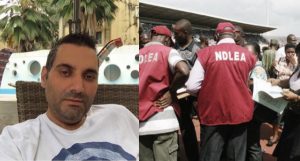 NDLEA who arrested the suspect following a tip off from worried residents of the area, trailed Chalouhi and his driver for some time before raiding his home at about 8am, where they allegedly found at least 1kg of cocaine.

A resident of the area said;

“People in this area have been very careful about complaining to law enforcement agencies about the activities of drug dealers, because such people can be very dangerous. If they get to know that you reported them, you could be harmed. People are living in fear, so the NDLEA should save us, save Nigerian youths.”

A source who spoke to The Nation’s correspondent, said some Lebanese in the country were pressurizing the NDLEA to free Chalouhi.

“Since his arrest, different Lebanese and top politicians have been calling the Lagos State Area Command and pressurising the investigating officer to drop the case.

“It has also been brought to our knowledge that they are about to release him between tonight and tomorrow morning without prosecuting him for allegedly dealing in and using drugs, which is supposed to be a minimum of 10 years imprisonment. They refused to investigate his girlfriend.

“Most importantly, for the security of our Nigerian youths and the prevention of the drug trading Lebanese cartels on the streets of Lekki, Victoria Island and Ikoyi, this case should be used to set an example to foreigners taking over our streets with hard drugs.”

“We are still investigating,” Suleiman said.

Flood: Prepare For Emergency Response, NEMA Tells States, LGs
Lights, Camera, AFRICA!!! 2018 Poses A Question: “Who Do You Think You Are?”