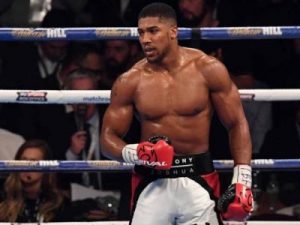 Anthony Joshua admits he is feeling the pressure ahead of Saturday’s Wembley showdown with Russian Alexander Povetkin.

Joshua will put his WBA, IBF and WBO world heavyweight title belts on the line against a potentially dangerous opponent.

And the Watford man said: “There’re loads of pressure. That’s the reality of it. “Even though we present ourselves as calm, cool and collected, we know what we’re in for.

“Not only this fight with Povetkin – every fight I’ve been in and every future fight I’ll be in. It comes with the same pressure.

“You’ve just got to roll with the punches what more can I do than give my best?

“And that’s what I’m going to do on Saturday night.

“You find a way to win and grind it out.”

AJ remains confident and believes his skill matched with a winning mentality will continue to see him achieve success.

Continue Reading
You may also like...
Related Topics:anthony joshua, Sports