According to a shocking report by The Blast, who obtained court documents, Chris Brown’s daughter, 4 year old Royalty Brown, stole money from her grandmother, Chris’s mum’s purse, which she reportedly gave to her mother, Nia Guzman, to help her buy a new house after Nia complained heavily about money. 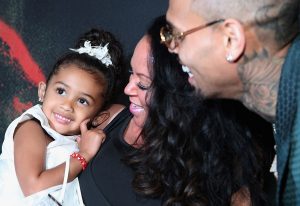 Nia and Royalty currently share a bed in a two bedroom apartment in Woodland Hills CA and Royalty says she wants her own room.

Last week Nia Guzman went to court to seek an increase in child support for Royalty which Chris is fighting. When they went to court, Chris’s legal team exposed the theft and blamed it on Nia who also reportedly told Royalty that their living conditions are because her father is a deadbeat dad.

Nia in her filing accused Chris of not allowing Royalty to bring home any of the expensive clothing he buys for her.

The case is ongoing.

Chris Brown Says He Has Been Friends With Wizkid For 10…