Arik Air early on Tuesday aborted take-off at the Benin Airport following an “abnormality” observed in the cockpit of its aircraft by the Pilot-In-Command. 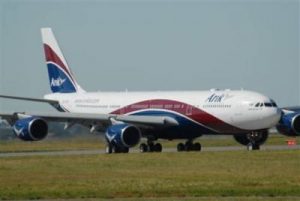 The airline’s flight W3 7631 from Benin was scheduled to take off in the morning and land at the Murtala Muhammed Airport (MMA), Lagos.

But, during the take-off run, the Pilot-in-Command observed that the aircraft had abnormality and had to abort the planned take-off.

The spokesman for the airline, Adebanji Ola, said that the aircraft, a Bombardier CRJ900, was brought under control on the runway in the process with no damage to the aircraft and no injury to the passengers on board.

There were no fewer than 110 passengers onboard the flight when the take-off was aborted by the pilot.

Ola said an alternative aircraft was immediately provided to fly the passengers to Lagos while the former aircraft has since been ferried to Lagos for checks/observation and maintenance.

This could not, however, be confirmed by SaharaReporters.

“Arik Air apologises to our customers for any inconveniences and restates its commitment to maintaining the highest safety standards at all times,” the airline subsequently said.

It would be recalled that Arik Air had on Sunday announced the diversion of all its flights arriving into Warri to Benin following the closure of Osubi Airport Warri by Nigeria Airspace Management Agency (NAMA).

Ola had said that NAMA, in a circular issued on August 29, 2018, said it was withdrawing Air Traffic Services (ATC) from Osubi Airport from 0000 hours on September 3, 2018 until further notice.

In order to minimise the disruption of travel plans of its valued customers, Arik Air said all its flights into Osubi Airport Warri from Lagos and Abuja will be diverted to land at the Benin Airport from Monday, September 3, 2018, until the Warri Airport is reopened.

“Customers who have booked to travel to Warri with Arik Air have been implored to bear with the airline in this period as a result of the disruption of services to Osubi Airport, Warri,” Ola said.

Police Arrest Husband And Wife For Selling Their Only Son For N180,000 In Cross Rivers