Man Stabbed To Death At A Burial In Ogun 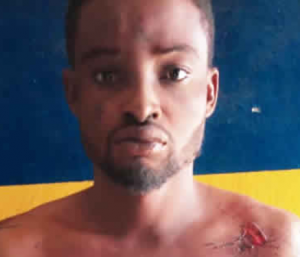 32-year-old Julius Oliseh pictured above, has been arrested by the police in Ogun state, for allegedly stabbing to death 23-year-old Isikilu Shittu at a burial at Mowe, in the Obafemi-Owode Local Government Area of the state yesterday Sunday August 5th.

According to reports, Oliseh and the Shittu got into an argument during the burial which later degenerated into a fight. Oliseh picked up a bottle and stabbed Shittu in the neck and after much bleeding, Shittu died.

A complain was laid at Mowe Police station by Akeem Shittu, brother of the deceased and Oliseh was immediately arrested.

“Akeem reported that he was at a burial party with his brother in Ogunru village via Mowe when argument ensued between the suspect and his late brother over an undisclosed minor matter. Consequently, he said the suspect broke a bottle and stabbed the victim in the neck and he died on the spot.”

He said the corpse of the victim had been deposited in a mortuary for autopsy.

Buhari Remembered You Despite Low 2015 Votes; Do Better In 2019 – Oshiomhole Tells South-East