You Have No Case To Answer, Supreme Court Tells Saraki

The Supreme Court has set free the President of the Senate, Dr. Abubakar Bukola Saraki, over allegations of failure to disclose his assets. 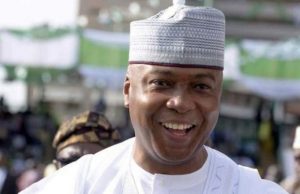 The judgment was delivered in the early hours of Friday.

Saraki had approached the court over the decision of the Federal Government through the Economic and Financial Crimes Commission to try him again before the Code of Conduct Tribunal, which had earlier set him free.

The CCT, headed by Danladi Umar, had last year terminated the trial upon an application by Saraki, by dismissing the entire 18 counts charge.

The CCT’s decision was based on the grounds that the prosecution, with its four witnesses and 49 exhibits tendered only led hearsay evidence which could not be the basis to link Saraki to the 18 counts preferred against him.

However, the Court of Appeal in Abuja on December 12, 2017 in an appeal filed by the Federal Government against the decision of the CCT, restored three out of the dismissed 18 counts and ordered Saraki to return to the CCT to defend the three charges.

Nweze agreed with the CCT that the evidence led by the prosecution at the tribunal was entirely hearsay.

He held that the Court of Appeal was wrong to have restored three out the 18 counts earlier dismissed by the CCT when it agreed that the evidence led by the prosecution was hearsay but went ahead to isolate three of the counts as having been proved.

He quoted a part of the Court of Appeal’s judgment where it held that “the prosecution failed to call those who have direct knowledge of the facts sought to be proved, to testify”.

Faulting the Court of Appeal’s turn around to restore three of the counts based on the evidence it had declared as hearsay, Nweze said was “equivalent to judicial equivalent of a forensic somersault”.