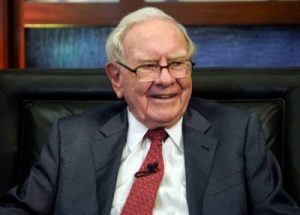 Warren Buffett has donated roughly 3.4 billion dollars of Berkshire Hathaway Inc stock to five charities, the billionaire’s largest contribution in his longstanding plan to give away his fortune.

Buffett’s 13th annual donation comprised about 17.7 million Class “B” shares of Berkshire, valued at 192 dollars each as of Monday’s market close.

The largest block went to the Bill & Melinda Gates Foundation.

Buffett’s own foundation, named for his late first wife Susan, and charities run by his children Howard, Susan and Peter received the rest.

His largest previous annual donation had been 3.17 billion dollars, in 2017.

Buffett still owns roughly one-sixth of Berkshire, the Omaha, Nebraska-based conglomerate he has run since 1965, in spite of giving away 43 per cent of the shares he owned in 2006.

Following the latest donation, Buffett was expected to rank as the world’s fourth-richest person, worth 79.2 billion dollars, according to Forbes magazine.

The five charities typically sell Buffett’s shares to finance their activities, reflecting his desire that money be spent in advancing the cause of humanity.

I Kidnap People To Raise Money For Charity- 52-Year-Old…