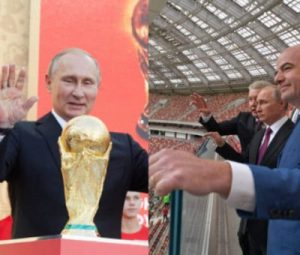 Foreign visitors holding “fan ID” cards for the World Cup will be getting a visa-free entry to Russia for the rest of 2018, as announced by President Vladimir Putin on Sunday.

Putin said Russia could be “proud” of its hosting of the football World Cup, judging it a success “in every respect” after final. Russia allowed soccer fans to travel to Russia without visas to attend the World Cup once they obtained fan IDs that were issued to supporters with match tickets.

“I think we will do the following: for foreign fans who currently have fan IDs, we will give them multi-entry visa-free travel until the end of the year,” Putin told reporters.

“We can surely be proud of how we organised this tournament,” Putin said in televised comments after France’s victory against Croatia yesterday.

“We have made this grand event a success in every respect,” he added.

“We have done it for our supporters, for Russians who are passionate about sport and for all those who love sport across the world.” Putin thanked the foreign fans who came to Russia for the tournament.

Before the World Cup competition started weeks ago, there was concerns due to the memory of violence between Russian and English fans during the Euro 2016 tournament in France.

Fans at this World Cup however “showed that sport and football can manage not to divide people and not lead to fights and disputes, but unite people on the basis of common values,” Putin said.

“People tried to scare us by saying the English would come and commit hooliganism… But everyone behaved in a most exemplary manner.”

France is leaving Russia with the trophy, having bested Croatia 4-2 in an intense final bout.

“The Croatian team played open football and took risks,” Putin said. “But, certainly, France showed very high class.” Russia’s leader revealed that he did not cheer for either team but watched the “football spectacle” instead.

Vladimir Putin Signs Law That Could Keep Him As Russia’s…