A journalist, who has been documenting stories and photo in various IDP camps in Benue State, has raised alarm over alleged child trafficking and teenage marriage in the camps sue to hunger. 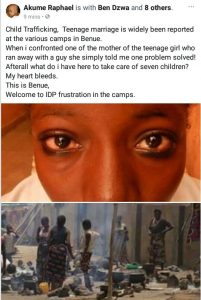 According to Akume Raphael, when he confronted a mother, whose teenage daughter ran away with a man, she said “one problem solved! Afterall what do i have here to take care of seven children?”

“Child Trafficking,  Teenage marriage is widely been reported at the various camps in Benue.
When i confronted one of the mother of the teenage girl who ran away with a guy she simply told me one problem solved! Afterall what do i have here to take care of seven children?
My heart bleeds.
This is Benue,
Welcome to IDP frustration in the camps”. 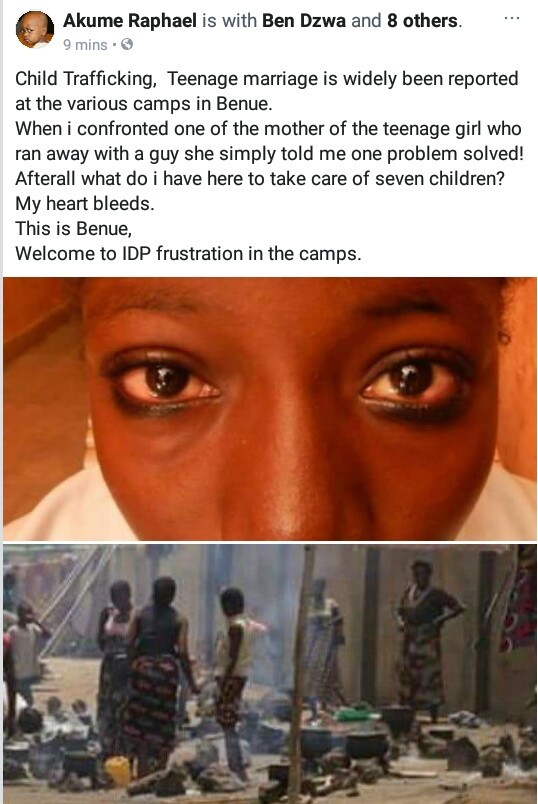 According to the executive Secretary, of the State Emergency Management Agency (SEMA) Mr Emmanuel Shior, over 80, 450 children including those of school age, 2, 442 pregnant women are currently languishing in seven Internally Displaced Persons camp in the State

Policeman Kills NYSC Member One Day To Passing Out

Police Officers Caught On Camera Assaulting Lawyer Have Been Arrested!