Youths In Adamawa Now Get High On Human Urine – NDLEA

The National Drug Law Enforcement Agency (NDLEA) Command in Adamawa says some youth in the state now utilises human urine to intoxicate themselves.

The state commander of agency, Mr Yakubu Kibo made this known Tuesday in Yola in his speech to mark the 2018 UN International Day against Drug Abuse and Illicit Trafficking. 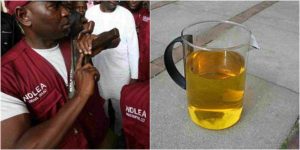 “It is important for parents to know and pay attention to the recently discovered substances of abuse like dry paw paw leaves, tom tom in lacasera drink, 10 days old human urine, methylated, spirit in coke drink, dry plantain leaves, burnt tyres among others,” he said. 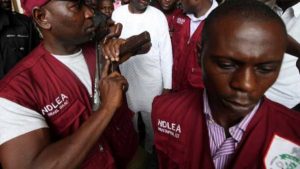 While describing drug abuse as a rampaging fire that does not discriminate, Kibo called for collaborative effort to create a drug free society.

“For the drug war to be successful, the supply and demand reduction must go hand in hand.

“To that effect, from January to date, the Adamawa command has seized 2,742.358 kg of assorted illicit drugs,” he said.

He also said that a total of 67 suspected drug dealers were arrested within the period under review out of which 26 were convicted and sentenced to various jail terms.

He listed lack of operational vehicle, inadequate staff, poor funding and hostilities by some communities as the major challenges facing the agency in the state.

44-Year-Old Man Born Without A Penis Finally Gets One

Vigilante Shot Dead By Son While Testing Efficacy Of His…