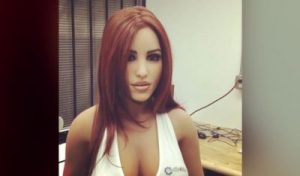 New upgrade by Dr. Sergi Santos, the creator of Samantha the sex doll, means she can turn down sex if she’s not in the mood or if she feels disrespected.

Santos upgraded the robot at the request of his wife, so it can now shut down if it feels like it’s being treated inappropriately, reports Independent UK.

The upgrade meant the doll can now enter what is called ‘dummy mode.’

The mode was demonstrated at the Life Science Centre in Newcastle, and it is activated if sensors under skin detect a partner is aggressive or if Samantha is bored by its partner’s advances.

She even has the ability to say “No” if she wants to.

Samantha was left “heavily soiled” after being presented at a tech fair last year, after people reportedly acted “like barbarians” towards her.

In theory, the new update will encourage sex doll owners to treat robot woman — and real women — with respect and create awareness about consent.

The robot has motorised hands, hips and face, and can whisper endearments if properly seduced. She also has ‘family’, ‘romantic’ and ‘sex’ modes, as well as an ‘extra naughty’ level.

3 Men Allegedly Contract Aids After Sleeping With The Same…

AH! Did Someone Just Marry A Sex Doll In Lagos?