Angered that his wife had given birth to their sixth girl child, a 36-year-old man stabbed their three-day-old daughter to death at his home at Moti Masang village in Dehgam taluka of Gandhinagar, India on Sunday, June 24. 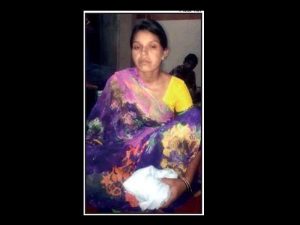 The accused was identified as Vishnu Kanuji Rathod, a farm labourer and his wife have five daughters, the eldest being nine years old.

“The complainant is the girl’s mother, Vimla,” said deputy superintendent of police, Gandhinagar, Vijay Patel. “Vishnu stabbed the baby so viciously that her internal organs spilled out of her body.”

The murder occurred when Vishnu was alone with the baby. When his wife saw him running out of the house, she became suspicious. She along with relatives grabbed him and later found the girl in a pool of blood.

“Vimla took the baby to Gandhinagar Civil Hospital from where she was moved to Ahmedabad Civil Hospital, said police sub-inspector of Dehgam, V B Desai. “The baby underwent surgeries, but did not survive.”

According to reports, Ahme said;

“The girl was stabbed multiple times in her upper abdominal area.”

The baby’s liver, intestines and pancreas had reportedly shot out of her body.

“It was the most gruesome and difficult case for doctors,” an eye witness said

“We had placed her organs back inside her body and operated her,” said Dr Rakesh Joshi, the head of the paediatric department at Civil Hospital.

“But she suffered three cardiac arrests during the surgery. After each cardiac arrest, she was revived but her life was ebbing away. She died despite being kept on ventilator.” added Dr. Joshi.

Man Pretends To Surprise Girlfriend On Her Birthday, Exposes Her For Cheating