8 Edo Indigenes Who Arrived Nigeria From Spain This Morning, Die In Accident

An accident which occurred this morning by 8:30am at the Wictech stretch of the Lagos – Ibadan expressway about two km away from Danco filling station, reportedly claimed the lives of Eight persons, five males and three females, all believed to be Edo indigenes. 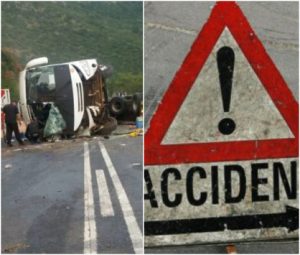 The late Edo indigenes who arrived the country from Spain this morning, had chartered the bus marked BEN 313 YX on the fleet of Iyare Motors and were going to Benin City for an engagement, when the accident happened.

Confirming the incident, the Public Relations Officer of TRACE, Babatunde Akinbiyi, said the driver of the speeding hummer bus ram into the rear of a truck marked MUS 730 XN in bids to overtake it. According to him, seven of the victims died at the accident scene while one other died later. Their remains have been deposited at the morgue of the Olabisi Onabanjo University Teaching Hospital (OOUTH), Sagamu where two others rescued alive, were also receiving treatment.

The Nation reported that operatives of the Federal Road Safety Corps (FRSC) and the Ogun State Traffic Compliance and Enforcement Corps(TRACE) were sighted evacuating victims, clearing obstructions and directing traffic.

We reported on Sunday that thirteen persons, including seven members of the same family, died in two separate road accidents in Enugu and Niger states.  In Enugu State, a Toyota Carina  E car with registration no CM 960 FKJ conveying a family and a Toyota Hiace bus with registration number ENU 75YY belonging to a mass transit company collided.

Seven family members and one other person died in a road accident which occurred at Ugwu Onyeama on the Onitsha-Enugu axis yesterday morning. The police spokesman in Enugu State, SP Ebere Amaraizu, confirmed the incident in a statement issued yesterday. He said following the accident, men of the Traffic Division of the Central Police Station Enugu were alerted and they responded promptly.

He attributed the accident to over speeding and dangerous overtaking; adding motorists should always obey speed limits as prescribed by the law and also install speed devise in their vehicles to check over speeding.