The Central Bank of Nigeria (CBN) has taken two approaches to deepen financial intervention in the real sector and boost economic growth. 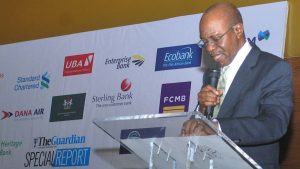 The Governor of the CBN, Godwin Emefiele, listed the approaches as de-risking of bank lending to the private sector through a wide-range of credit guarantee schemes, and direct intervention initiatives in key high-impact sectors, including agriculture, micro-small and medium enterprises, manufacturing and power.

According to him, the initiatives are essentially to ensure the flow of credit to the vital sectors of the economy.

Emefiele said the vulnerability of the Nigerian economy to global shocks simply reflected the fact that the nation was unable to sufficiently produce what it consumes, leading to unwarranted dependence on foreign goods.

The CBN governor spoke while receiving The Guardian Economic Personality of the Year award at the weekend in Lagos.

“We depended on oil sector to provide the foreign exchange needed to finance our imports. Related to this is the poor diversification of the economy and low factor productivity in key non-oil sector.

“There is the issue of an ostentatious and elitist taste for imported goods in Nigeria. But, perhaps the most important of these factors is the inadequate finance to strategic high impact and high employment multiplier sectors,” he said.

To mitigate the adverse effects of the global shocks, the CBN embarked on a number of short- term and long-term policies, including monetary tightening to rein in inflation, and external reserves management through the restriction of foreign exchange for the importation of goods that can be produced in Nigeria.

“So far, N393.5 billion has been released to 478 large-scale agricultural projects since inception in 2010. The CBN is also poised to disburse up to N400 billion at nine percent interest rate under the Real Sector Support Facility.

“Under the Nigeria Incentive-based Risk Sharing System for Agricultural Lending, more than 224 projects valued at over N33 billion were guaranteed for the Federal Ministry of Agriculture’s Growth Enhancement Scheme.

“As we speak, domestic rice production has increased many folds and its imports have crashed substantially. While Kebbi State alone is expected to produce over two million metric tons of rice annually, employees at Labana Rice Mills are trying to keep pace with demand, processing 320 tons of rice a day, a 250 percent increase from the previous year.

“Nigerian economy is experiencing a cyclical upswing and consolidating its recovery. There is a fall in headline inflation from a peak of 18.7 percent in January 2017 to 14.3 percent in February 2018. There is stabilisation and convergence of the exchange rate around N360/$ today from about N525/$ in February 2017.

“There is increased foreign exchange supply with over $20 billion inflow to the I&E window since inception in April 2017; strong recovery of the external reserves, which recorded increase from just over $23 billion in October 2016 to over $46.7 billion as of March 29, 2018; and improvement in the World Bank’s ‘doing business’ indicators, with Nigeria progressing by 24 notches.

“Many local manufacturers are reporting major boosts to their revenue and profit. Psaltry International Limited (PIL), an agro-allied manufacturing company based in Oyo State, produces starch. Before the policy, it had a few customers and plenty of backlogged inventory. Today, PIL boasts of over 50 multinational clients, including Nestle and Unilever. The company has saved Nigeria $7 million in foreign exchange drawdown over the two years of the policy,” The CBN governor said.

Meanwhile, the Editor of The Guardian, Abraham Ogbodo, explained at the event why Emefiele was chosen for the Economic Personality of the Year award by the newspaper. He said that the choice of the CBN governor was influenced by his ability to resist Bretton Woods prescriptions, calmness in the face of difficulty, evolving workable alternatives and successfully navigating the “stormy weather.”

According to Ogbodo, the CBN, under Emefiele’s leadership, had to stretch into fiscal responsibilities just to save the day, as more people tend to blame the governor more than the president and any other official for the nation’s economic challenges.

The editor said that Emefiele and his lieutenants maneuvered through the “three troublemakers” – inflation, interest and exchange rates – to the existing level, even though the trio could not be controlled at once.
According to him, confidence could be reposed in the award, which came from a newspaper not known for frivolities and thus it could serve as a collateral for Emefiele even at the World Bank and International Monetary Fund for bigger money to further strengthen the economy.

Pointing to Emefiele’s resistance to free market economy posited by foreign investors and their allies, Ogbodo added that even in the West where the concept was invented, it had never existed.

According to him, while advanced economies revel in the use of home-grown policies to solve similar challenges, even when ours is working well, it hardly gets the deserved mention.

He urged the CBN to apply the rules to ensure sanity in the financial system, but it should also not forget to make the investment climate conducive and competitive in the process.

Emefiele said he appreciated in a very special way the management and staff of The Guardian, not just for organising the award, but particularly for the foresight and thoughtfulness at publishing the Financing the Economy.

He said the exposé contained therein would indeed aid an understanding of the uniqueness of our financial structure and illuminate and fill the lacuna that exists between lenders and borrowers of funds.

“It is no news that the level of credit in the domestic economy channelled to productive private sector is critically below the levels required to place our economy on the path of balanced, sustainable, and inclusive growth,” he said.