I Slept With My Daughter Only Five Times, Says Suspect

A 50-year-old man, Taiwo Oyelabi, has been arrested for allegedly sleeping with his biological daughter. The suspect, who is currently being detained at the Gender Section of the Lagos State Police Command, was also accused of impregnating his 21-year-old daughter, Taiwo Nibilia Oyelabi. 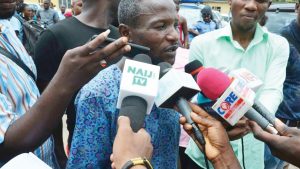 Confessing to newsmen, the suspect admitted having an affair with the young girl, saying he had canal knowledge of her only five times. “I only slept with my daughter five times and it took place in my house. She came to me the first time kissing me while I was lying down on my bed, and urging me to make love to her. At first I was surprise but I gradually yielded to her demand.

“It all started some years back after my wife, who is also the girl’s mother moved out of my house over a minor domestic quarrel. She actually left with our twin kids while they were still young. At the time she left, she kept the children in the custody of my younger sister.

“However, Taiwo came back to stay with me in 2017. That was how this whole drama started. Like I said, it was the girl who came to me for sex the first time, but I demanded for it subsequently. I thought of committing suicide when it dawned on me. I tried to take my own life twice.

“There was a time when I tried to drink insecticide but some petty traders prevented me from doing so in my area. I also tried to jump into a well the second time, but was rescued by neighbours who saw me when I attempted to climb the well. I know it is the handwork of the devil and I pray that God and members of my family would have mercy on me,” he said.

The Lagos State Commissioner of Police, Imohimi Edgal, who paraded the suspect before newsmen at the command headquarters, Ikeja, yesterday, said a case of incest was first reported at Igando Police Station on April 16. Edgal said the report was actually made by some concerned members of the public who felt sad about what was happening.

He said that preliminary investigation carried out at Igando police station revealed that the suspect has had sexual intercourse with his daughter on several occasions.

“Based on the findings at Igando, the case was transferred to the Gender Section of the Command on April 18, for a more in-depth investigations. The suspect, Taiwo Oyelabi, who resides at No. 15 Community Road, Obadore, Iyana Oba, while the victim is the suspect’s 21-year-old daughter.

“Both have been having inappropriate sexual liaison, the result of the unholy alliance between father and daughter was pregnancy. Investigation into the case revealed that the suspect is a security man but the strange part of his work was that whenever he was going to work, he goes with his daughter. This strange behavior attracted the attention of the community and they reported to the police,” Edgal told newsmen.

Meanwhile, in line with its objective to rid Lagos of all criminal elements, the state police command yesterday paraded 20 suspected armed robbers and three cultists arrested in different incidents. The suspects, according to the state police boss, Edgal, were arrested between April 8 and last week Sunday.

Giving a breakdown of the arrests, he said Damilola Oluwole, 27; Seyi Adebayo and Olasupo Jeremiah, were apprehended on April 8, following complaint from the management of AB Hotel at Shogunle that the premises was attacked by armed robbers.

He said the Federal Special Anti-Robbery Squad (FSARS) operatives from Mushin were directed to fish out the culprits, which they did within 24 hours. He said a locally-made pistol, one expended and five live cartridges were recovered from the robbers’ hideout at Akala, Mushin.

Also, four other suspected armed robbers were arrested on April 17, at about 11:00a.m. while they were about to sell a Highlander Sports Utility Vehicle (SUV) they snatched at gunpoint. He said: “Operatives of FSARS at Mushin were dispatched and thy intercepted the suspects. The team arrested one Olamilekan Lamidi alias Dudu with the said vehicle at Ogunsanga Street, Mushin.

“They followed up on the case and arrested Yusuf Jimoh, 36, Isah Ogungbenro, 29, Sulaiman Osayemi, 28, and Seun Shoneye, 29. One of the suspects, Osayemi led detectives to Idi-Araba where a Toyota Highlander SUV, three locally made short guns and eight live cartridges were recovered.

“On April 20, at about 5:30p.m., one Raphael Oluwanisola of 1, Adeniyi Castro Street, Alagbado was arrested along Ile-Iwe Road, Meiran. They flagged down a man carrying a bag on a motorcycle. Upon questioning him, he said he was a thrift collector and attempted to bribe the policemen with N5,000.

“The officers refused the offer and suspected something was wrong. He immediately jumped down from his motorcycle and started running but he was pursued, apprehended and his bag searched. Three locally-made cut-to-size pistols and 11 cartridges were recovered from him.

Also arrested in a separate incident were one Noah Olaniyi, Moshood Fatai, Segun Ajibade and Abiola Ige while attempting to sell their stolen loots – two laptops, one iPad and three handsets, to one Lukman, the receiver of stolen goods. The CP said a search warrant was executed at the receiver’s house and three additional laptops were recovered from him.

Meanwhile, one Barrister Arowole Gabriel, who had earlier reported the theft of his electronic gadgets from his shop in Mushin, has identified the recovered items as his. This prompted a fresh quizzing of the receiver and he confessed that one Azeez, also currently at large, sold the laptop to him. He said all arrested suspects would be charged to court for prosecution.