Why You Should See Black Panther 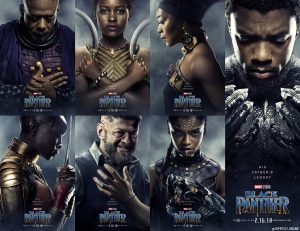 I am a movie buff.
But in all my years of seeing great Hollywood movies especially Marvel comics, no movie has ever made me feel so proud to be a strong African woman as Blank Panther did.
You’re probably thinking, how does how you feel make Black Panther a great movie?
Read on, and hopefully, the few points of my mine will convince you…lol.

On a more serious note, in a world where racism, skin color change amongst other things make many (young) people not so proud of their African roots, this movie is a strong breath of fresh air and the cultural impact undeniable. Agreed, Black Panther, Wakanda was all made up in Stan Lee’s head, but the effect of movies in our lives today consciously and other wise cannot be overemphasised. 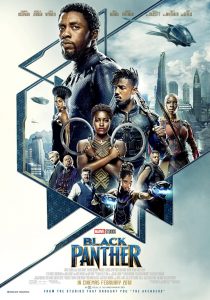 Before delving into why I think Black Panther is a MUST WATCH and the best Marvel movie ever made (In My Opinion ) Let me shed a little light on what you should expect from the movie in terms of the plot and cast. In doing this, I’d try as much as possible not to give too much away.

Black Panther is set in a rich African country of Wakanda, where their main source of wealth is Vibranium, the supposed strongest metal on earth- the metal Captain America’s famous shield was made from. To the outside world, Wakanda is a 3rd world country full of farmers, and ruled by a Monarch, but in reality, Wakanda is rich in state of the art tech and Vibranium, hidden from plain sight to the outside world. Their Monarch is the Super Hero Black Panther played by Chadwick Boseman.
All is well at first after King T’Challa / Black Panther(Chadwick Boseman) ascends his fathers throne, until he is challenged by his vengeful, power drunk cousin Erik “Killmonger” Stevens played by Michael B. Jordan. From then on the story unfolds.

Aside Chadwick Boseman and Michael B Jordan whose roles I already described above, other lead characters are:
Lupita Nyong’o as Nakia: T’Challa / Black Panther’s love interest)
Danai Gurira as Okoye:  head of the Dora Milaje, the all-female special forces of Wakanda who serve as T’Challa’s bodyguards.
Daniel Kaluuya( of the GET OUT Fame) as W’Kabi: A confidant to T’Challa and his best friend, who is the head of security for the Border Tribe, serving as the first line of defense for Wakanda.
Letitia Wright as Shuri: T’Challa’s 16-year-old sister and the princess of Wakanda who designs new technology for the country
Angela Bassett as Ramonda: T’Challa’s mother and Queen Mother of Wakanda
Forest Whitaker as Zuri: An elder statesman in Wakanda, and the keeper of the heart-shaped herb
Winston Duke as M’Baku: A powerful, ruthless warrior who is the leader of Wakanda’s mountain tribe.

Prior to the official premiere there had been a lot of hype about the movie, especially because it is Marvel’s first movie with a predominantly black cast.
The announcement of the powerful cast in 2017 and appearance of Chadwick Boseman in Captain America:Civil war also gave a glimpse into how awesome this defining movie will be.
But still, I was apprehensive. We all know how a movie can get tremendous hype but fail to live up to expectations.
Thankfully however, Black Panther isn’t one of those movies.
It exceeded my expectations in more ways than one. Little wonder Rotten Tomatoes rated it 98%, IMDB 7.5/10. 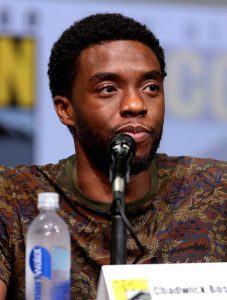 The Cast that stood out for me

At first when I heard about the cast, I wasn’t too sure about Boseman playing King T’Challa/Black Panther.
I haven’t seen many of his movies, and I could have thought of 10 fantastic Hollywood actors whom I would have thought would interpret the Black Panther role perfectly. However his cameo in Captain America: Civil war showed that he could really bring T’Challa alive. This he did remarkable well, and the strength of T’Challa’s character as played by Boseman couldn’t be questioned.

Michael B Jordan
He played T’Challa(Chadwick Boseman’s) nemesis and villain in the movie.
Jordan’s performance in Creed was remarkable but his role as Erik KillMonger is perhaps his most outstanding role yet as an actor. He played the complete opposite of T’Challa – angry, vicious, power hungry and Vengeful, and his interpretation of the role is very commendable. Through this movie, I see him as a strong, versatile actor, able to take even more challenging roles in future. 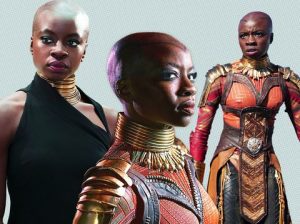 But aside T’Challa (Boseman) and Jordan( Killmonger), there was OKOYE(Danai Gurira) AND SHURI(Letitia Wright).
Okoye the commander of the Dora Milaje was my best character.
She epitomizes to me, what a real African woman should stand for.
She is proud of her heritage and loyal, strong willed yet has a great sense of humor, Loving and kind, focused and objective, but above all, has a remarkable understanding of sense of self. Okoye knows who she is, what she stands for and strives to execute her duties to the best of her abilities.

Prior to seeing the movie, I didn’t know Danai Gurira well as an actress, in terms of ability, I just knew her face and name. As a result, I didn’t know what to expect even though I knew her role as the Commander of the Dora Milaje was vital. But now, I cannot think of any other actress who could have interpreted Okoye’s role better. She made me feel very strong ( not literally as I have no talent in marshal arts lol) like I can take on almost anything and still stand tall. She also made me feel even more proud of my skin color with the grace with which she carried herself.
Gurira is definitely one to watch out for in Hollywood.

Letitia Wright who played Shuri, T’Challa’s teenage sister was also very impressive. Aside being the brain behind Wakanda’s state of the art tech, The 24 year old who plays a teenage whizkid, brought a lot of comic relief to the movie. She was very believable.

The Dialogue is another reason Black Panther is a great movie.

The writers, were able to infuse a lot of sarcasm, comic relief, innuendos and subliminal messages which reflected Africa in a positive light into the dialogue. At many points during the movie people reeled with laughter at some of the unexpected hilarious comments thrown in by the characters in very serious/dire situations without necessarily watering down the seriousness, and still passing very vital conscious messages.

Racial/tribal dichotomy, Importance of having a good understanding of self, importance of not being afraid to stand out, Africans as an intelligent, under celebrated people, Importance of self-appreciation and preservation, Racial equality and friendships, Unity in Diversity, Vengeance as a road that often times leads to destruction, Loyalty and forgiveness, self-acceptance, humility etc are some of the themes explored by the movie.

This is a movie that many (young) people will watch and be proud of their skin color no matter how dark, or African they look, especially in Nigeria where lightening of the skin is the order of the day. It is also a movie many  parents can be comfortable letting their kids (in this context 13 and above)watch  knowing that it has so many vital lessons, especially in terms of self-preservation.

The attention to detail is also commendable. They tried as much as possible to infuse traits from different African cultures into this movie and ensure some form of representation since Wakanda is a fictional state. We see this in the different tribes represented when T’challa was to be made King and throughout the movie.
Still on detail, there was a particular scene where Lupita had to drive and her feet was shown on the pedals. In many action movies, even in the face of stress and anxiety the main character wears shoes, even heels (where it is a female). Here, Lupita drove with her bare feet. Many Africans especially women ( I don’t mean this in a derogatory manner) drive with their bare feet.

From the Queen Mother, to the Members of the different Tribes, the Dora Milaje and other lead Characters, the props and costumes where beautiful and well thought out. Again here, inspiration was taken from different African cultures, but the influence of modern day Western fashion on African fashion could also be seen in the costumes.

I absolutely loved the theme music/soundtrack many of which were done by rapper Kendrick Lamar.

Black Panther premiered in Los Angeles on January 29, 2018, and was released officially in the United States and around the world on February 16, 2018, in IMAX and 3D. The film has received critical acclaim, with praise for the direction, costume design, action sequences, soundtrack, and performances of the cast, with some calling it one of the best films set in the MCU and noting its cultural impact. It has grossed over $72 million worldwide and takes Super Hero storytelling to the next level.

It is s a must watch for everyone.