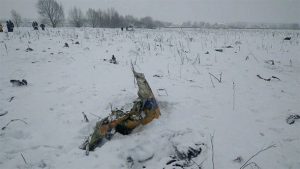 According to Russian news agencies The Antonov An-148 plane operated by the domestic Saratov Airlines was flying to Orsk, a city in the Urals, with 65 passengers and 6 crew members, but crashed in the Ramensky district outside Moscow.

Though it is not yet clear what had caused the plane crash which happened as temperatures hovered around minus 5 degrees Celsius with periodic snowfalls, however eye witnesses in the village of Argunovo saw a burning plane falling from the sky. Investigators said they had opened a criminal case into the incident, and are looking at all possibilities.

The plane, manufactured in 2010, had been carrying 65 passengers and six crew. It disappeared from radar screens shortly after taking off from Moscow’s Domodedovo airport.

“Debris has been found, there are no survivors,” the TASS news agency quoted an unnamed emergency service source as saying.

Elena Voronova, a spokeswoman for Saratov Airlines, said there had been no concerns about the technical condition of the plane, which had went into service with her company in 2016. Images broadcast on state TV showed relatives waiting at Orsk airport, some with their heads in their hands.

Relatives of the plane’s passengers have gathered at the airport in Orsk in the Orenburg region, its intended destination. The emergencies ministry opened a hotline offering information about the tragedy and psychological assistance.

Recall that few weeks ago, we reported that alarmed passengers recounted how they were terrified when one of the emergency exit doors fell off a plane as it landed in Nigeria’s capital, Abuja.

Passengers took to social media to document their experiences aboard the Dana Airlines aircraft Wednesday.
Ola Orekunrin, a doctor from Lagos, tweeted that the “exit door fell off” the Nigerian airliner as they touched down in the city on their 6.48 am flight from Lagos to Abuja.
She added that the door had been “unstable throughout the flight.”
newsplane crashrussia
0
Share FacebookTwitterGoogle+ReddItWhatsAppPinterestEmail