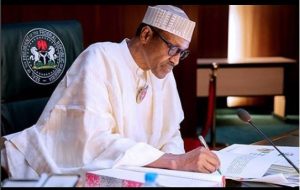 President Buhari has written to the Senate listing the steps his administration has taken to stem the tide of clashes between herdsmen and farmers in Benue state. The letter was read on the floor of the senate today by Senate President Bukola Saraki. The letter reads

I thank you for your letter referenced NASS/8S/R/01/33 dated 18th January 2018 and carefully studied the resolutions and comments there in. As I briefed you and the RT. Hon speaker when we met, several courses of action have been taken prior to the senate resolution.

“You may recall that I told you of the following steps taken as soon as the information came in to me about the Benue killings.

“Three, on Monday 8th, the minister of interior met with the following, governors of Adamawa, Kaduna, Niger, Benue Taraba and Nasarawa together with the DG of the State Security Services, inspector-general of police, CG civil defence, Minister of Agriculture and Rural Development and police commissioner of the six aforementioned states.

“After the meeting, I instructed the Minister of Interior to brief you on the information gathered so far and steps taken.

“On Tuesday, 9th of January, at a session with Governor Samuel Ortom of Benue state during which in informed of police arrests of some suspects. In addition, I told him that I have instructed to speed up trial of the suspects and give wide publicity of the police efforts.

“At the instance of the governor, a meeting was held in the presidential villa on 15th with a wide cross-section of Benue personalities and frank and open discussions were held. Everybody appreciated the difficulties of this farmers-herders strife. I assured all of my commitment and assured justice would be done.

“To infer therefore that nothing has been done, is incorrect. The police are strenuously working to apprehend the rest of the culprits of these heartless killings.

“Furthermore, I have instructed the IGP to relocate to Benue state and redeploy forces to the most sensitive towns. The federal government is initiating measures to address these and other security challenges, alleviate the consequence of these attacks and forestall reoccurrence. The senate resolution itemised in your letter would be taken into consideration and I’m instructing all relevant MDAs to factor them in their work.

“On December 19 to be precise, while receiving the report of the committee that was set up to review the technical and administrative structure of the NIA, I underscored the need to review the entire national security architecture as I promised in my inaugural address on the 29th May 2015. Action is being initiated to receive maximum cooperation from the senate in line with paragraph three of the senate resolutions.”