Cardi B, Logic And SZA To Hit The Stage At 2018 Grammy Awards

The Recording Academy has announced that more music artistes will be performing on the stage of the 2018 Grammys slated for this month.

What this means for the hip-hop community is, that Childish Gambino will not be the only one performing at the Grammys slated for this month.

He will be joined by Bodak Yellow queen, Cardi B, Logic, and SZA. 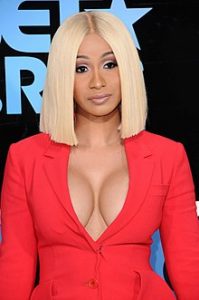 Cardi will be performing the Finesse Remix with Bruno Mars while Alessia Cara, Khalid and Logic will perform 1-800-273-8255 alongside a group of suicide attempt and loss survivors.

Jay-Z’s 4:44 and Logic’s 1-800-273-8255 got a place for Song Of The Year while Lil Uzi Vert and SZA have earned spots for Best New Artist.The show will be hosted by media personality, James Corden and will be broadcast live on CBS Television Network by 1:30 AM on the 29th of January, Nigerian time.

British Prime Minister, Theresa May Under Pressure Over Healthcare Crisis

You Should Challenge Governors Not Praise And Give Awards,…

He Will Win A Grammy – Nigerians React To Burna…