British Troops In Afghanistan Given Only £1 Each To Celebrate Christmas 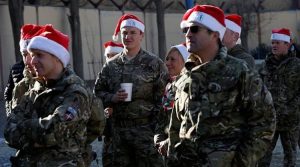 Five hundred British troops deployed to Afghanistan were allocated a total of just £500 for Christmas, the Sunday Times revealed.

Some said the defense chiefs’ frugality left the troops lagging far behind their foreign counterparts as soldiers from the American contingent reportedly received eight Christmas trees, decorations, turkeys, numerous gifts, and even a copy of the new Star Wars film.

“The contrast between the American and British approach is staggering,”said a British officer stationed in Kabul.

“As an army we don’t have as much money as the US, but even the Danish and Mongolians seem to be doing more,” he noted.

The tight Christmas budget has affected morale, one soldier told the newspaper: “They haven’t even sent us enough for a coffee. The Americans send in more money to feed the stray cats on their compound.”

Christmas festivities for troops from the Yorkshire Regiment have been limited to sneaking out and swapping the stars on the American trees for Yorkshire flags, the paper said. 📸: RT